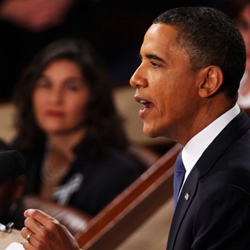 Which parts of Obama’s address particularly resonated with the public? One can judge the congressional response to each line by listening to applause in the chamber, but it's harder to know what the country as a whole thought. One way to find out is to look up every single sentence in the speech on Twitter and study each response. Yes, this took a while, and yes, I should probably find other hobbies, but the results were worth it.

Each point in the graph below represents a single sentence, ordered from left to right by order in the speech; the height of the point represents how many people retweeted it. 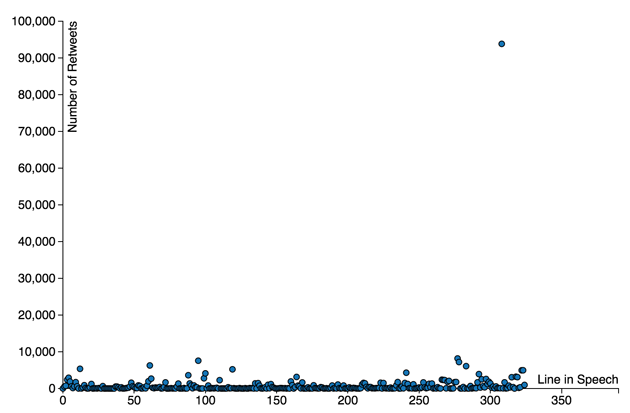 What is that point in the upper-right corner, the quote that is shared 10 times as widely as any other line in the speech? Surely it must be some rhetorical masterstroke, a particularly inspired policy proposal? No: it's the ad-libbed moment in the speech where Obama puts down the Republicans.

Obama: "I have no more campaigns to run." Republicans: *applause* All: *laughter* Obama: "I know because I won both of them." #SOTUBURN.

We criticize our politicians for lack of civility, but how do we expect them to behave when we pay more attention to their snappy retorts than their policy proposals?

Zooming in on the graph (click here and mouse over points to see which quotes they represent) we see that many of the most widely shared lines reprise the messages of hope and unity that so resonated when Obama originally took office: 'I still believe we are one people', 'I still believe that together, we can do great things', and 'Let's begin this new chapter - together - and let's start the work right now'. (More substantive lines, like those about gay marriage, community college, middle-class economics, and climate change, were also shared widely).

The only problem with these pleas for unity? For the most part, only the Democrats found them compelling. Self-identified liberal tweeters outnumbered self-identified conservative tweeters more than two to one for every single one of the top 25 most retweeted lines in the speech. Among those sharing 'My fellow Americans, we too are a strong, tight-knit family', I could identify 96 liberal tweeters and only 5 conservative tweeters1: perhaps not such a tight-knit family after all.

So what lines were shared among Republicans? Here are the lines whose retweeters skewed most conservative (among lines shared by at least five tweeters with identified political affiliation).

Of course, political party isn't the only characteristic that affects how we react to a speech. Men and women2 reacted in different ways as well.

After I completed this analysis, I could see why Obama’s speechwriter needs a stiff drink. He had to please a thousand different constituencies in a single speech, half the country wasn’t going to be happy no matter what he said, and the line that people liked best wasn’t even in his draft. I’ll stick to writing code.

This article first appeared on Emma's Obsession with Regression blog.