A long-range forecast for the UK general election 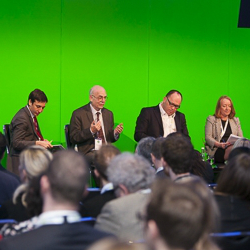 What do you get if you ask a Labour Party pollster and a Conservative Party advisor to predict the outcome of the 2015 UK general election? Two very different answers, of course. And so it was that during a debate at the Market Research Society annual conference this week, James Morris (a former speechwriter for Labour leader Ed Miliband) predicted a Labour victory, while Andrew Cooper (a former director of strategy for the Conservatives) predicted that Tory leader David Cameron would remain prime minister 'in some sort of messy coalition'.

However, if there is one thing both sides agree on, it’s that the vote on May 7 will be close. A landslide victory is not on the cards for either party, much as they might like it to be. Mike Smithson, the editor of politicalbetting.com, and the closest thing the debate had to an impartial observer (though he is a former Liberal Democrat councillor), said that based on current models, the Labour and Conservatives were heading for between 270–280 seats each – not enough to form a majority in the 650-seat House of Commons.

This would mean another five years of coalition politics, with the next government decided by agreements and concessions between parties. This is what makes the election so hard to read, said debate chair Deborah Mattinson, the co-founder of research firm BritainThinks and a former pollster to ex-prime minister Gordon Brown. This time around, it’s not a clear-cut, two-way popularity contest between Labour and the Tories as it might have been in elections past. Instead, there are several different battles that will affect the outcome of the vote in one way or another: whether it’s the Labour versus SNP vote in Scotland, the Tory versus UKIP battle in England, or the question marks over the fate of deputy prime minister and Liberal Democrat leader Nick Clegg.

Should Clegg lose his Sheffield Hallam seat, the next leader of the Lib Dems, or the party itself, might be less inclined to form a coalition with the Tories as it did in 2010. If the Labour vote collapses in Scotland, as it is forecast to do, the SNP might find itself as ‘kingmaker’ – commanding enough seats to help one party or the other form a government. However, it’s almost impossible to imagine that the SNP would partner with the Tories, making a Labour led coalition the more likely outcome (though Miliband has ruled out such a pact with the SNP).

Andrew Cooper acknowledged that, as things now stand, Miliband would have more coalition options. However, he thinks that 'the air has been coming out of Labour’s tyres' and that the Tories have started inching forward – though he said there is currently 'nowhere near enough momentum' for the party to win outright. Smithson had a different reading of the current dynamics, pointing to the latest tranche of constituency polls from former Conservative party chairman Lord Ashcroft as showing signs of a Tory-to-Labour swing of around 5%. Morris also took this as an indication that Labour was moving forward, hence his optimistic forecast for May 7.

But Cooper highlighted polling work done by his own company, Populus, which suggests that some 14% of the electorate claim they won’t vote Conservative, and yet they favour Cameron over Miliband as prime minister, and the Conservatives over Labour on management of the economy. How voters resolve this particular dilemma will have an impact on vote share and seats come election day.