Where is Donald Trump’s statistician? 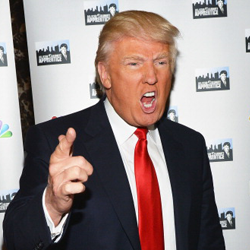 When Donald Trump announced his candidacy for President of the United States, he included a racist insult directed at those citizens who came to the US from Mexico. Apart from his words being abhorrent, it’s also a baffling strategy to follow for a candidate looking to reach the White House in the 21st century.

According to 2013’s census numbers, the Hispanic or Latino population in the US has reached 54 million, which translates into about 17% of the total population. They are officially the nation's largest ethnic or racial minority. So it’s no surprise that the US now has more Spanish speakers than Spain. To put this in perspective, in the 2012 presidential election the difference between Obama and Romney was of about 3.5 million votes. That means that less than 10% of the Hispanic population could have changed the outcome of the election.

It may take you five minutes to Google these simple facts, yet no one seems to have told Donald Trump. It’s quite clear that the billionaire didn't bother to hire a statistician for his campaign team, even though hiring a data analyst for presidential campaigns is pretty common these days. As a result, he is following a doomed strategy that will certainly take him nowhere. Anyone with common sense can see it and there’s no shortage of news outlets saying it. But I'm a statistician, so I'm here to describe, with data, how flawed Donald Trump’s campaign strategy is.

In 2014, Hispanics represented 11% of the eligible voters in the US and 8% of the actual voters, according to some exit polls. More than half of the growth in the population of the United States between 2000 and 2010 was due to the increase in the Hispanic population and nationally, 800,000 Latinos turn 18 every year, making them eligible to vote.

It's easy to see that Hispanics represent a very significant section of the vote, but maybe it won't affect Trump as he is only attacking Mexicans, right? Actually, 63% of all Latinos in the US classified themselves as Mexicans, according to 2010 census data, so he certainly chose the worst country south of the border to attack. It gets worse if you consider that Hispanics are a very close group and Trump's attacks have actually strengthened and united the community, as even Antonio Banderas has been promoting a Latin bond against Trump. Rather unexpectedly, Trump has triggered what some are calling ‘the Latino moment’.

Now, American politics is weird. A president with the higher national voting proportion can actually lose an election, as happened in 2000. The US has an Electoral College system, where each state has a number of ‘points’ assigned to it, based on its population. Winning the election in any particular state gets you all the ‘points’ the state has, even if you only win by a small margin. In the end, the president is not the one with most votes, but the one with most ‘points’, or electoral votes. As a result, a smart political strategist might be interested in just winning key states, so perhaps Trump has a genius strategist taking this into account? Well, not even close.

Over half of the Hispanic population in the United States resides in just three states: California, Texas and Florida. Guess which are the states with the highest number of electoral votes? That’s right! California, Texas and Florida (tied with New York). California and New York usually lean Democrat, so most analysts may claim that Trump will lose those states no matter what. Texas has always voted Republican and even due to the increase in the Hispanic population there, the party alone might be powerful enough to warrant a win for Trump.

But Florida is a different matter: Florida is one of the ‘key’ states because of its number of Electoral College votes and the fact that the voters usually swing between the two major parties. Remember the uncertainty and time it took to define who won the presidential election in 2000? It was all Florida's fault, as it was the state that defined the election. 17% of the population in Florida is Hispanic, so Trump has immediately lost one sixth of the available population and about 15% of 2010's registered voters in the state. There are also other states, like Nevada, Florida, New Mexico, Colorado and Virginia where the Hispanic numbers aren't that high, but due to the low difference in votes that the two major parties usually have, Latinos can play a significant role.

But even if you don't believe statistics are enough to prove how damaging Trump's declarations have been, just ask Macy's, Univision or NBC. Just a few days after the billionaire made his infamous claims, many US companies immediately responded by severing ties with Trump and his brands. Latinos lit up social media and online petitions to complain, and their concerns were heard. These companies understand that the Hispanic population has tremendous political and economic power, so it makes business sense to keep them happy.

Latino consumers are expected to control about $1.5 trillion in consumer buying power in the US this year, a 50% increase compared to 2010. And for some products, Latinos and Latinas are their key market. Cosmetic and beauty companies have only seen sales growth in this particular demographic. American companies know how powerful and important the Hispanic market has become.

And the influence and political power of the Hispanic population is only rising. According to Pew Hispanic Center projections, 40 million Hispanics will be eligible to vote by 2030, the highest growth among all demographics. And there's a lot of untapped potential, as Latinos have some of the lowest participation rates in the country. As they participate more in politics, possibly by uniting against a celebrity’s harmful and racist remarks, the number of votes that Hispanics actually cast in future elections could double. Even more if immigration and naturalization reforms allow them to vote.

All these trends and data point in the same direction – the Hispanic population is becoming a powerful and important force in the United States. Politicians know it, companies know it. How an American CEO, entrepreneur and investor failed to see this is beyond my understanding.