Politics is broken: The Guardian’s Alberto Nardelli on the fragmentation of party support 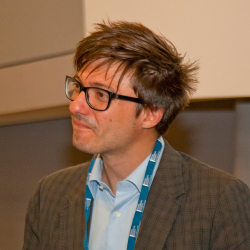 It’s almost the end of party conference season in the UK – a time in which political leaders take stock of the past, propose grand visions for the future and throw policy ideas through the ringer of debate and discussion. Party bigwigs talk about opportunities, of course, and challenges too. And one of the biggest challenges they face is the fragmented nature of modern politics.

Where political support in the UK was at one time concentrated in the three main parties – the Conservatives, Labour and the Liberal Democrats – the 2015 election saw large numbers of votes shifting to smaller parties, including those that made barely a dent at the last election five years ago.

This fragmentation has had a profound impact on journalists like Alberto Nardelli, whose job is to try to gauge how people might vote.

Nardelli was front and centre of the Guardian’s reporting team during the 2015 UK general election. As data editor of the newspaper, he and his colleagues were tasked with gathering together the results of various different voting intention polls – each of which suggested slightly different outcomes for the UK’s main political parties – and from these disparate sources, they would produce a poll of polls which in turn would be used to predict how many seats each party might win in the House of Commons.

Most people will know by now that the forecasts were incorrect – not only the Guardian’s but all of them. How could they have got it so wrong? Nardelli believes that the fragmentation of the electorate was partly to blame, along with errors in anticipating voter turnout, and he said as much during the Significance lecture at the Royal Statistical Society Conference in early September.

'Nearly 25% of the vote in May went to parties other than the Tories, Labour or the Liberal Democrats,' said Nardelli. 'This is a record, and there are two important characteristics behind this figure: (1) fragmentation – the measure in which votes are distributed among multiple parties – and, (2) the pace at which this change has occurred.'

This shift in vote patterns can be partly attributed to a breakdown in trust in mainstream political parties, Nardelli believes, and he sees a similar situation in much of Europe, where trust in political institutions – as measured by the Eurobarometer poll – 'is at record lows' and party allegiances have undergone similar shifts.

Nardelli said fragmentation had given rise to four common trends in the European political landscape:

'We live in a society of extreme views – of record lows and of record highs,' said Nardelli. This state of affairs is certainly very different from what it was in the recent past – and this, Nardelli believes, is why predicting elections has become more difficult. 'The tools and methods we use often rely on the past to explain the present,' he said – but the past might no longer be a reliable guide to the present and future.

'So how do we – whose job it is to explain data – analyse such a fragmented and constantly evolving landscape?' he asked. 'The solution is one of experimentation, trial and error, and intellect – and although challenges will remain, I am convinced this is the easier bit of the problem. A far greater challenge is how we use data to tell stories.'

Nardelli then turned to the subject of immigration – which nearly 40% of Europeans cite as the issue of most concern facing the European Union, according to the Eurobarometer poll. Extreme views abound on this subject, and the public’s perception of the ‘problem’ of immigration is often at odds with the reality of the situation. However, Nardelli said: 'Too often politicians have drafted policy not on facts but to indulge such perceptions – and they continue to set targets and expectations [to reduce immigration] that they are unlikely to meet, which will further exacerbate trust.' If Nardelli’s thesis is right, the end result may very well be further fragmentation of the political landscape.

What can be done to break this cycle? Nardelli suggested that: 'Those of us that work with data have, in my view, a duty to not only try to understand and inform those issues that matter most, but to reach people with our work so that they can make informed decisions.

'But data alone is not enough,' he argued. 'Our challenge is to marry facts with stories and emotion. Statistics can tell us who and what we are, but to do this with purpose we need to also combine meaning and storytelling. Without humanity, data alone is otherwise meaningless.'