Two years ago, the UN called for a 'data revolution'. How far have we come? 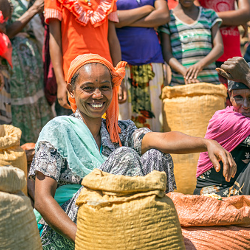 Today is World Statistics Day - a chance to celebrate and showcase diverse applications of data, and how the work of statisticians is helping to improve lives. The October 2015 issue of Significance features several such articles, including the following piece from Claire Melamed, the director for poverty and inequality at the Overseas Development Institute. Two years after a United Nations report called for a "data revolution", Melamed takes stock of how close we have come to achieving that goal.

Data has never been so in demand. This may come as something of a surprise to the legions of statisticians, epidemiologists, demographers, econometricians and others who have been labouring away in the face of public and political disinterest for decades, but suddenly data is the hot political issue, at least in some circles.

The first inkling of this came with the calls for a “data revolution” in a United Nations (UN) report from May 2013. A UN panel that featured two presidents, a prime minister, the CEO of a Fortune 500 company and a Nobel Prize winner, among others, suggested this revolution was needed to “improve the quality of statistics and information available to citizens” by taking advantage of “new technology, crowd sourcing and improved connectivity”. It was an idea whose time had come: this small phrase then unleashed a wave of thinking and agonising about data – and in particular, about how inadequate is the data on many of the world’s gravest problems.

To the campaigners, the politicians and others who use such data, the fact that, for example, there are actual reported numbers for just 15% of all malaria deaths1 and 16% of all births2 was a bit of a shock. These percentages, of course, are only estimates. Around half of all the data used to monitor the Millennium Development Goals – internationally agreed targets for tackling extreme poverty – was estimated, and – over the life of the programme, which ends this year – there was no five-year period in which more than 70% of the data needed3 to track the goals was actually available, and no one year in which more than 50% of the data was available (IEAG secretariat calculations, based on figures from UN Statistical Division).

The data used for monitoring global goals is only part of the story. A reliance on nationally representative surveys for much of the data that is used to track development targets means that for many indicators it is almost impossible to disaggregate at a sub-national level. A national figure on access to clean water, for example, is good for monitoring a country’s progress on global goals, but very much less useful in planning the investments that will help a country to achieve those goals. Without knowledge of where water is short and who is lacking access, policy to improve access to water is unnervingly like guesswork. This is the situation that faces many governments as they try to plan investments and resource allocations for health services, for education and for infrastructure.

Waking up to the problem
The dawning awareness of the gaps in data has come together with other pressures to start to improve the quantity and quality of data available. Firstly, on the demand side, growing pressures from citizen groups and others for more information about what governments do in their name has made governments pay more attention to what they know and how accurate it is. Luckily, this has coincided with dramatic changes on the supply side, as new technology slowly improves every aspect of data collection, processing and use – from the use of tablets for collecting survey data to the use of mobile phone records to track disease epidemics.

So the stage is set for the data revolution. Indeed, it is happening all around us. The question is how this revolution can be mobilised to fill the gaps in data, to improve the information available to governments and citizens, and to galvanise both public and private sectors to improve services and give people more of what they want and need.

Last year, the UN Secretary General asked a group of the world’s experts on data, the Independent Expert Advisory Group on the Data Revolution for Sustainable Development (IEAG), to help provide some answers to that question. The final report, A World That Counts, which I authored, argued that a collective effort on data is needed to enable governments to both achieve and monitor the ambitious new Sustainable Development Goals, due to be agreed at a special session of the United Nations in September 2015.3

During the production of the report, we were offered glimpses of the world of data that awaits, if the investments are made. The Mtrac programme in Uganda, for example, supported by the children’s rights organisation UNICEF, the World Health Organization and the US Agency for International Development, uses SMS surveys, completed by health workers, to alert officials to malaria outbreaks and to monitor stocks of the required drugs at health facilities. Before Mtrac, the Ministry of Health had almost no data on individual health facilities. Now, thanks to more than 20 000 health workers who contribute data, the government can collect data on thousands of health posts, and analyse the results in less than two days, at a minimal cost. The vast majority of reports are followed up within two weeks, and the number of facilities that are out of stock of critical drugs to treat malaria at any given time has fallen from 85% to 15%.3

It is this combination of old and new techniques, with appropriate provision for privacy and human rights, that offers the most exciting possibilities in the data revolution. It is not a question of established techniques being superseded by new methods, but of how they work together. Traditional data collection methods such as surveys can offer essential “ground truthing” to newer data sources: pictures collected by satellite, or mobile phone call records. But these new methods can offer the kind of real-time data that a survey cannot. It is by putting them together that the real, radical, improvements will be and are being made.

What next?
With so much activity already happening, it might seem that the wisest course of action is to step back and let it happen. It is certainly important that any action by governments, multilateral institutions and other players does not squash the huge creativity and innovation that has characterised the data revolution so far.

But there is a real risk of growing inequalities in access to data and in capacity to use and benefit from new sources of data. As always, it is the countries, companies and individuals with the most resources that are benefiting most from the new opportunities. To some extent this is inevitable. But it would be a tragedy if, starting at this low base, and knowing what we know about the risks of rising inequality, action were not taken to try and spread the benefits and to use the data revolution to improve data on the people and issues about which least is known – for example, the estimated 230 million children under 5 whose births are not registered.4 This is where collective action – to encourage investment in areas of greater need, to provide incentives for filling the world’s most pressing data gaps, and coming together to solve critical problems – can help to even the scales and help all to benefit.

The need is there, and the report of the IEAG has been followed by action on a range of fronts. The UN system has been mobilised to continue the work, by committing to sponsor a “World Data Forum” in 2016. There continues to be a focus on how data can be improved as a key part of achieving the new Sustainable Development Goals – and a recent conference on Financing for Development confirmed the importance of new investments in data collection and use to make that possible. A group of governments, companies and civil society organisations – among them the USA, Kenya, Colombia and Mexico; Mastercard and Orange; and the ONE campaign and Civicus – are working together and with others to form a global partnership on data for sustainable development.

But a revolution is not simply a report, a world forum or a global partnership, important though they are. All of these things are just means to an end. That end is improvements in the lives of people. Human happiness can seem quite removed from analysis of satellite photos or thousands of call records on a spreadsheet, or the painstaking work of cleaning survey data. But the links are real.

The Ethiopian Commodity Exchange, for example, sends price information to farmers regularly throughout the day – and farmers’ share of the export price for key crops doubled within four years of the exchange opening. As a trader commented, somewhat ruefully, at a public meeting: “Even if I wanted to cheat farmers I can’t, because they know the prices before I do”. In Seoul, the use of mobile phone records tracking people’s movement around the city at night enabled better planning and pricing of night bus routes, saving poorer residents an estimated $1.2 million overall.

The start of something bigger
This is just the beginning. As policy-makers, funders and campaigners wake up to how much is not known, and the ways in which this prevents action on things that they care about, the demand for more and better data can only grow. A host of new data providers, working together with established agencies, are poised to fill those gaps. And these groups are slowly being brought together, and learning how to work together for the collective good.

It may be surprising to find data in the international political spotlight. But everyone who thinks that it is important to have good data, to produce good information and ultimately good policy, should seize this moment and use it to raise the investments, the innovations and the collaborations that can create a lasting legacy.