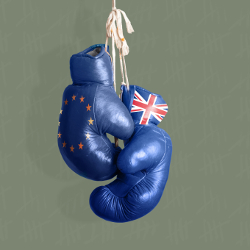 On 23 June, the United Kingdom will vote on whether to remain a member of the European Union, or leave. Many politicians have already declared which side of the argument they are on, but what about the rest of the country? Polls, such as YouGov’s, suggest opinions are split: 37% say they want to remain, 38% want to leave, and 25% either don’t know or won’t vote. But it’s a bit too early to make any predictions for how the vote might shake out. As YouGov’s own website notes, referendum polling this far out tends to be “a poor guide”.

“People often decide how to vote in referendums much later than in general elections,” says YouGov, “and referendum polling is often far more volatile than general election polling. Many people consistently vote for the same party across many elections, so will always have a good idea how they would vote in a general election, but a referendum is normally a one-off where people do not have a pre-existing firm loyalty.”

That’s not to say there isn’t already solid support for the Leave or Remain options. Analysis by Matthew Goodwin and David Cutts, using data collected by YouGov last November, finds that 29% of respondents are what might be termed ‘Hard Remains’, while 27% are ‘Hard Leaves’ – meaning they are almost certain to vote along those lines in the referendum.

A further 19% and 17% respectively are ‘Soft Remains’ and ‘Soft Leaves’, while 8% are ‘Unsure’. These groups are the ones most likely to be persuaded by the arguments put forward between now and 23 June. But what arguments are likely to sway voters, one way or the other? Statistical analysis conducted by Professor John Curtice of the University of Strathclyde offers some clues, and suggests tactics that either side might look to adopt.

The rise of Euroscepticism
Curtice’s analysis is based on data collected between July and November last year by NatCen Social Research and its British Social Attitudes (BSA) survey. BSA has been tracking opinions on Europe since 1983, asking whether Britain should ‘continue’ as an EU member, or ‘withdraw’: in 2015, 60% backed the former, and 30% the latter.

So far, so good – you might think – for the Remain camp. Even if this doesn’t reflect the most up-to-date opinions, it at least suggests a solid base on which to build. But, in presenting the results at a Westminster briefing yesterday, Curtice noted that the language used by BSA is different to that being used at the referendum, and it’s unclear whether a word like ‘withdraw’ might have negative connotations that affects the way some survey-takers respond.

Instead, since the 1990s, BSA has asked a more nuanced question, giving respondents different options for the UK’s relationship with the EU. These are:

The answers to this question, as Curtice says in an accompanying report, “paint a rather different picture” – with 22% in favour of option (1) and 43% for option (2). Together, these two groups might be considered the Eurosceptic portion of the population: the 65% who either want to sever ties or scale back the EU’s legislative reach. This Euroscepticism has been on the rise since 1993, at which point in time only 38% of BSA respondents were in favour of the first two options. UK Prime Minister David Cameron is clearly backing option (2), and recently negotiated a deal to restrict in-work benefits to migrants, reduce child benefits for migrants, and to exclude Britain from the EU’s aim of “ever-closer union”. However, to return briefly to YouGov’s poll this week, 35% of those surveyed thought Cameron’s deal was either fairly or very bad, versus 25% who thought the deal was fairly or very good (39% didn’t know either way).

Identity and the economy
The BSA data can’t tell us whether Cameron’s deal will be enough to sway Eurosceptics – particularly those wanting a reduction in EU powers – to vote to remain within the union. However, what it can do is help shed light on the issues of concern to voters.

To do this, Curtice ran a multivariate statistical analysis, which examines relationships between multiple variables. In this case, Curtice explains, “...we construct an equation that summarises the relationship between, on the one hand, the various views that people have about the consequences of being in or out of the EU and, on the other hand, their overall attitude towards the institution”.

Specifically, the analysis looked at the key influences that determine whether someone is in favour of ‘continuing’ within the EU, or ‘withdrawing’ from the union, and whether they could be classed as a ‘Eurosceptic’ – someone who wishes to leave or reduce the EU’s powers – or a ‘Europhile’ – someone who wishes to remain or increase the EU’s powers.

One especially strong influence was the issue of British identity, and whether this was being eroded by continuing EU membership. Those who felt strongly that it was were more likely to want to ‘withdraw’ from the union and were more likely to be Eurosceptic. In other words, says Curtice: “Cultural concern thus clearly runs strongly behind both a wish to leave the EU and scepticism about the institution.”

However, it would seem that cultural concern alone is not enough to convince all sceptics to favour withdrawal. Of those who either 'agree' or 'strongly agree' that the EU undermines Britain’s identity, a clear majority (82% and 93% respectively) could be classed as Eurosceptic, yet only 42% of those who ‘agree’ with that statement say they wish to withdraw from the EU, compared to the 80% who ‘strongly agree’.

Instead, what separates Eurosceptics from those favouring withdrawal is belief in the economic impact of leaving the EU. Responses to this issue were found to clearly distinguish between those who wished to ‘continue’, and those who wished to ‘withdraw’ from the union, with the former more likely to believe that Britain’s economy would be worse off outside the EU, while the latter were more likely to believe it would benefit.

“The high level of Euroscepticism in Britain is thus primarily a reflection of the widespread concern about the cultural consequences of membership,” writes Curtice. “But for Euroscepticism to become translated into a demand for withdrawal, it appears that voters also need to be convinced of the economic case for leaving.”

Table 1. Support for withdrawing from the EU by cultural concern and economic evaluations. Source: John Curtice/NatCen Social Research. Note: Figures in brackets represent the unweighted sample size on which the percentage immediately above is based.

Thus, Curtice concluded, economic arguments will be “crucial” to both sides – Leave and Remain – as the UK prepares to vote on 23 June. Arguments about immigration and identity may be unlikely to convince voters to back a 'Brexit' if those in favour of staying can convince the public that the economic benefits of the European Union outweigh fears over 'meddling' Eurocrats.