On Tuesday, 8 November 2016, the United States will hold its 58th quadrennial presidential election. Many pundits believe, as they have done throughout the campaign, that Democratic candidate Hillary Clinton stands a better chance of winning than Republican nominee Donald Trump. However, a new ABC News/Washington Post poll puts Trump ahead – albeit only by a percentage point, which is well within the poll’s margin of error.

But just how far can we trust the polls to give us an accurate read on the likely election outcome? As we have done for the 2015 UK general election and the 2016 EU referendum, we review the predictions for the previous presidential election, held in 2012, and note the errors that were made.

Not so simple
The election of the President of the United States is easily understood by most people: there are two candidates who stand for election throughout the US and the one who gets the most votes wins. The problem with that sentence is that every bit of it isn’t true. There are more than two candidates, they don’t all stand in every state, and the votes they cast are recommendations to 538 electoral college members, some of whom can and do ignore the public vote when casting their votes for President.

The complexity in the structure of the contest can make predictions difficult. It also invites a range of different prediction formats, which fall into three broad categories: electoral college predictors, vote share predictors, and probabilistic predictors. Respectively, these three different approaches predict the number of electoral college votes for each candidate, the percentage of the popular vote for each candidate and the probability that each candidate will win. Examples of predictors include betting odds, opinion polls and mathematical models.

To compare the performance of each type of predictor, we will select a maximum of five predictors from each category.

The candidates
As nominees of the two biggest political parties in the US, Clinton and Trump have attracted the vast majority of the election campaign coverage. But in this election, as in past elections, there are more than two candidates and more than two parties vying for the presidency. Post-war candidates achieving considerable fame or infamy include Ralph Nader (Green) in 2000, Ross Perot (independent) in 1992, John Anderson (independent) in 1980, George Wallace (American Independent Party) in 1968, and Strom Thurmond (States Rights Democratic Party) in 1948. In the 2016 election, candidates other than Clinton and Trump include Darrell Castle (Constitution), Gary Johnson (Libertarian) and Jill Stein (Green) - although Castle isn’t standing in enough states to win.

But regardless of their relative merits or their chances of victory, this article will not include these other candidates in its assessment of prediction accuracy. This is simply because there aren’t enough predictors for these candidates to merit their inclusion. Although some bookies, betting exchanges and spread bettors may include third-parties, some do not, and few polls and even fewer academic and other predictors include them in their forecasts.

To deal with those polls and predictors that do include results for third-parties, we adopt a two-party forced format in which predictions for these candidates (as well as any undecided voters) will be proportionally reallocated to the official Democratic and Republican candidates.

We briefly considered the merits of a one-party forced format: whether to force each prediction into a “will the incumbent party win or not?” format. It had the virtue of simplicity, particularly in respect of backward compatibility, but in the end we rejected it.

However, as noted previously, there are problems with using MAE for a two-party-forced election, since it has no direction and doesn’t differentiate between an underestimated result and an overestimated result. So, in preparing  this article, we examined three other metrics: the error of the Democratic lead (ELD), the error of the incumbent party lead (ELI), and whether the predictor actually predicted the winner (WIN). For a two-party-forced prediction the definitions of MAE, ELD, ELI and WIN are given below.

Our previous analyses suggest that an acceptable error for a UK General Election prediction is an MAE of no more than 2%: the elections of 2015 and 1992 had MAEs of 2.75% and 2.25% respectively and were labelled as “debacles”. We will note whether the predictors for the US presidential election meet this threshold on a two-party-forced basis.

Which results shall we measure the prediction against?
It is possible to extend presidential predictors back for many years: Nate Silver gives a summary of predictors back to 1992 and Ray Fair has been modelling since 1980. But we will restrict our analysis to one result: the 2012 presidential election.

The predictors selected will be for the week on/before polling day of Tuesday, 6 November 2012.

The predictors
Opinion polls
Polls provide a means of asking people who they intend to vote for and, just as in the UK, a US poll can be conducted using different methodologies, which can give different results. Those methodologies include:

Whereas the UK is relatively small and densely packed, the US is a big country with some sparsely-populated areas and a much larger electorate: in 2012 it had 235 million people eligible to vote and 129 million valid votes were cast. Polls in the UK usually cover England, Wales and Scotland and have begun to correct their historical neglect of Northern Ireland, but polls in the US cover two distinct geographies:

The statewide polls will not be considered in this article. Whether 50 individual state polls are better or worse than one nationwide poll is a matter of debate.

Betting odds
Gambling takes place at different times, in different jurisdictions, uses different words and is covered by different legislation and oversight. This is a problem for this article because some US terms (moneyline, sportsbook, vigorish, spreads, over/under) are used rarely or differently in the UK. To try to get around this we will set out our terminology here and use British usage or invented terms to avoid ambiguity.

We will use the word “punter” to describe someone who wants to make a bet, the word “bookie” for the person who takes the punter’s money, and the word “book” to describe the set of all odds on a given event offered by the bookie at a given moment. The book can be translated into probabilities (for a description of this process and the “overround”, see a previous article). Bookies fall into the following categories:

Errors for opinion polls
We captured nationwide opinion polls immediately before the 2012 presidential election and selected the five which we could most consistently retrieve over 2008, 2012 and 2016. They were:

We then calculated the MAE for these nationwide polls and the results are displayed in the table below:


We see that for our small selection, the 2012 predictions underestimated the lead of the incumbent party (Democratic), and that the MAEs were within the 2% threshold for an acceptable UK General Election, with one exception (Rasmussen). Four out of the five predictors correctly predicted an Obama win, albeit marginally by CNN (who predicted a draw).

Errors for betting odds
We captured betting odds immediately before the 2012 presidential election and selected five from just before the election (in contradistinction to “in-play” odds on the day of the election itself, which vary too fast to be useful), with a view to comparison to later elections. They were:

We then calculated the MAE for those captured odds and the results are displayed in the table below:


These errors reinforce observations in our previous articles: probabilistic predictions such as fixed-odds have much larger MAEs than vote-share predictions. These MAEs are far outside the 2% threshold for an acceptable UK General Election. However, all five predictors correctly predicted an Obama win.

We then calculated the MAE for those predictors and the results are displayed in the table below:


Table 3. Vote share predictions from academic and other predictors, 2012. All results in two-party-forced format.


We see that for this selection the errors are small with no obvious pattern with respect to under- or over-estimation, and again the MAEs are within the acceptable 2% threshold, with one exception (Fair). Note that since Lichtman’s binary predictor correctly identified the winner and nothing else, his error is zero. Five of our six predictions correctly predicted the winner.

Errors for all predictors
If we depict all the errors from the previous sections on one graph, we see the following: 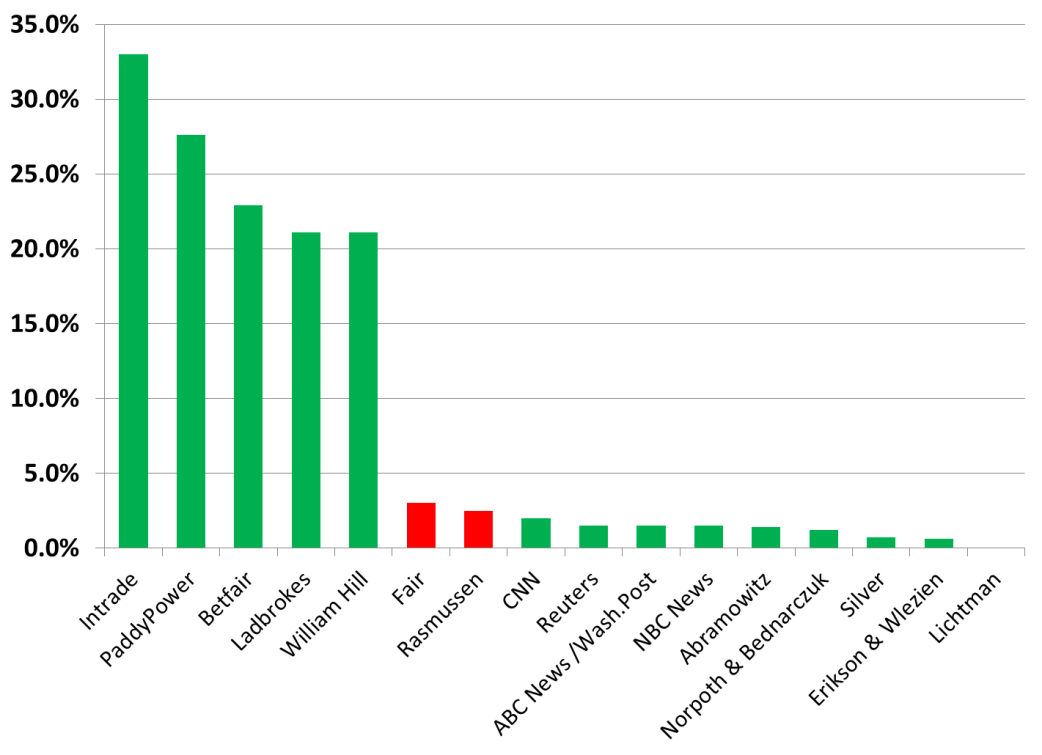 
We find that the MAE of the betting odds is prohibitively large and illustrates a quandary previously encountered: the problem with the MAEs of probabilistic predictions is not how to calculate them, but how to fit them on the graph. The polls and other predictors did considerably better, being mostly within the 2% two-party-forced (2PF) MAE threshold acceptable for a UK General Election. However, all our selected betting odds accurately predicted an Obama win, whereas the Fair model and Rasmussen polls incorrectly predicted a Romney win.

Applying the error to 2016
Older readers may remember the glory days of by-election coverage on BBC Newsnight by Peter Snow, who used to end his sessions by applying the vote swing from party to party to all the UK constituencies, a process which would inevitably end in an implausible landslide for one side or another. It wasn’t psephological science but psephological theatre, but it was compelling nonetheless and it leads us to ask: “What would happen if we applied the 2012 errors to our 2016 predictions?”

So let’s do just that. Let’s take our 2016 predictors as they stand today and see what happens if we apply the 2012 MAEs to them. Remember we said that the equation “MAE = |error of the lead/2|” for a 2PF prediction was important? If we rearrange that equation to give “error of the lead = ±2*MAE” we can work out what the errors of today’s predicted leads might be if they are as inaccurate as they were last time.

We selected predictors for Clinton/Trump that matched predictors for Obama/Romney and extracted their values immediately on/before Sunday, 18 September 2016, which is 51 days before polling day. We list them in the table below and apply the 2012 errors to our 2016 predictions. 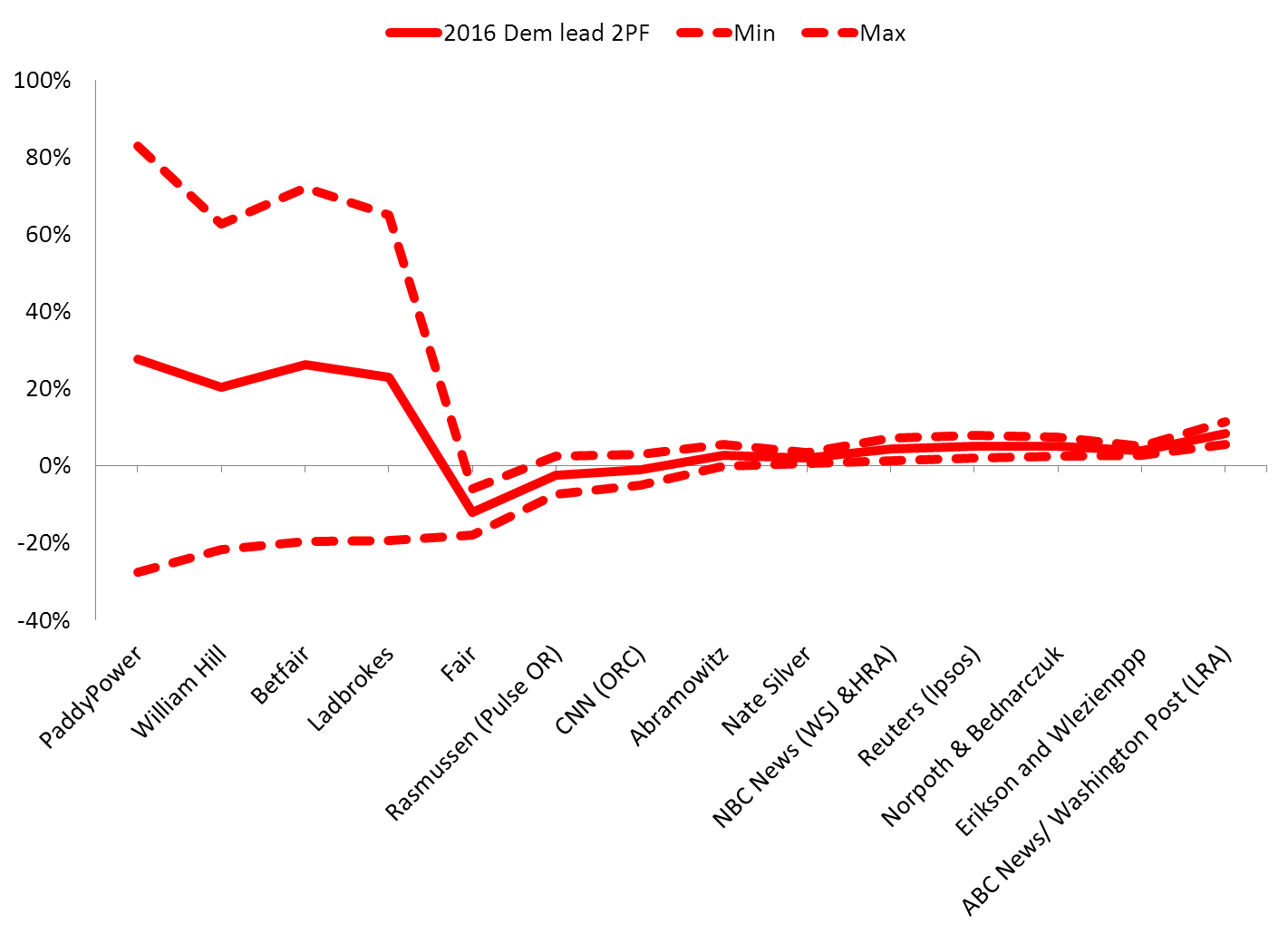 
This isn’t probability theory: we aren’t using margin of error or variance here. This figure is simply an illustration of what would happen if our 2016 predictions (as of September 18 2016, 51 days before polling day) were as inaccurate as they were in 2012 (just before the vote). But it does illustrate that despite the common belief that Clinton is winning, it is entirely possible that Trump may yet clinch it.