Before Donald Trump's inaugural speech on Friday, 20 January, I wondered whether he would turn the political world upside down by delivering a high-energy improvised riff in the style of his campaign rallies. But no — his speech was scripted and read verbatim as written, although it did feature several of the signature lines from his rallies, as well as the first use of the word "carnage" in a presidential inaugural.

Content aside, the performance seemed to me to feature unusually short phrases with unusually long pauses, resonating with the rather negative tone of the event as a whole. This struck me as very different from Mr. Trump's spontaneous style, and also unusual by the standard of other recent inaugurals.

To check this impression, I took the word counts for the last 15 inaugural addresses from the page at The American Presidency Project, and used links to YouTube videos from that site (or from YouTube search where the result was lacking or blocked) to get the corresponding audio. I estimated speaking rate crudely by dividing the total duration of the speech by the number of words in it. This obviously doesn't allow for applause or other non-speaking interventions, except that I removed a "moment of silent prayer" from the audio of Reagan's 1985 speech.

The result confirmed that Donald Trump's inaugural address was slower-paced, overall, than that of any other president in the past half-century except for Jimmy Carter in 1977: 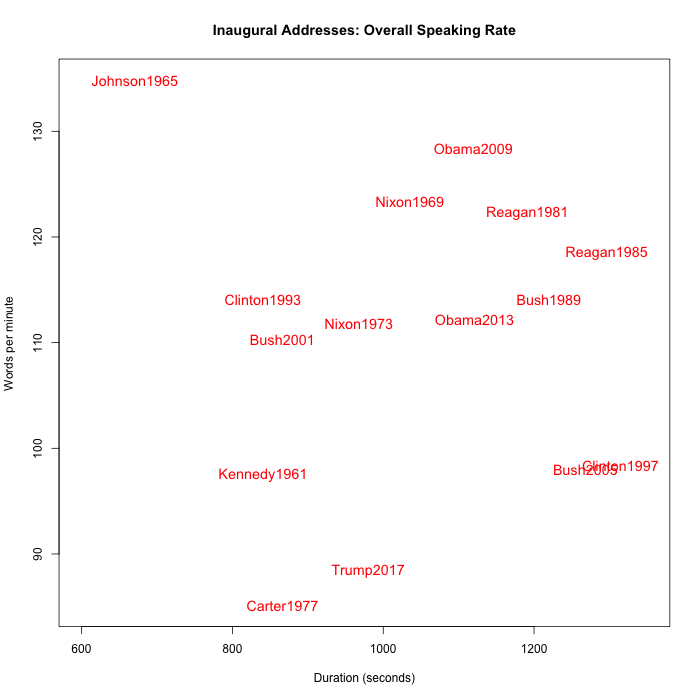 
Overall speaking rate depends on a number of things — the distribution of word counts in spoken segments lengths, the speaking rate within the spoken segments, the number and duration of silent pauses, and so on. At some point in the future I'll look into these factors for the inaugurals in more detail.

But here's one small example. Jimmy Carter started his address this way:

"For myself and for our Nation, I want to thank my predecessor for all he has done to heal our land."


Those 21 words and the audience reactions to them take 48.7 seconds — if we subtract those from Carter's totals, his overall rate changes to 88 WPM, tied with Mr. Trump.

And just for comparison, my transcription of Trump's December 2015 rally in Grand Rapids, Michigan has 10,456 words in 3738 seconds (including pauses, cheering and so forth), for an overall rate of 168 WPM.

I next ran a speech activity detector over the inaugurals, and unsurprisingly, what's special about Donald Trump's delivery is the relatively large number of short speech segments and short non-speech segments. Here's a comparison to Reagan1981: 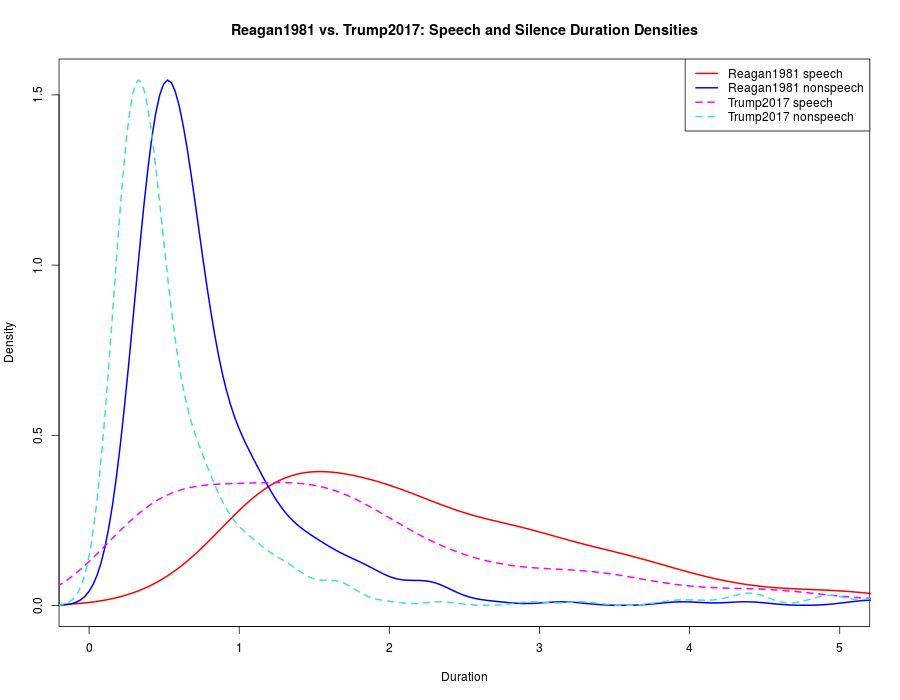 To some extent, the difference in overall speaking rate (Reagan 122 wpm, Trump 88 wpm) is due to the fact that Reagan's address was 72% speech and 28% non-speech, vs. Trump's 62% speech and 38% non-speech. More silence → fewer words per unit time.

But another factor is Trump's larger number of relatively short spoken segments: his median speech segment duration was 1.51 seconds, vs. Reagan's median of 2.04. The consequence is that a larger fraction of Trump's words are subject to the normal process of pre-pausal lengthening, because the proportion of pre-pausal words is larger.