Written by Stephanie Kovalchik on 14 November 2013. 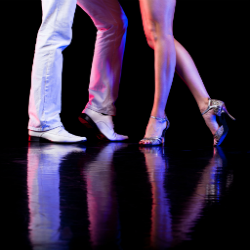 On October 14, Christina Milian stood under the spotlight with the threat of elimination during that weeks edition of Dancing with the Stars, ABC’s popular dance competition that is now in its 17th season, she was the picture of assurance. The former media correspondent for The Voice, that other mega hit talent competition broadcast by NBC, and her professional partner, 13-season veteran, and 2-time winner Mark Ballas ended up at the top of the judges’ leaderboard, thanks to a sensational cha-cha tribute to strong single moms that earned them a 28 out of 30 possible points and the first 10 of the season.

Why wouldn’t Milian smile unafraid when it came down to her or comedian Leah Remini? After all (Milian had to be thinking) Remini and her partner Tony Dovolani had earned the lowest score of the night, how could they not be sent home? The cards seemed so obviously stacked in Milian’s favor that no one could have been more shocked than Milian herself when it was finally revealed that she and Ballas were out of the competition. So what went wrong? Should Milian cry foulplay? Not just yet. There is, in fact, a legitimate cause for the baffling results that have become all too common on DWTS: a flawed voting system.

A brief explanation of how the voting system works will make its shortcomings clear. To advance to the next round, competitors have to avoid getting in last place, which is determined by a combination of judges’ scores and fan votes. The show aims to give an equal weight to judges and fans by taking the sum of the percentage of points earned and the percentage of votes made by viewers on a given night. So, for example, on that Monday the judges gave a total of 235 points to the 9 remaining couples, giving Milian and Ballas, who had a 28-point routine, 12% of the judges’ vote. Supposing they received 10% of the total audience votes the previous week (previous seasons used the votes from the same night, then announced the results in a separate and excruciatingly long “results” show), Milian and Ballas would have had a score of 22 to determine whether they survived to dance another day. Although we now know that Milian and Ballas must have received the lowest percentage of the audience vote, no one but the show’s producers knows the actual percentage because, for some unfathomable reason, a tighter lid is kept on the public vote for DWTS than on secrets of the NSA.

Does the sum of the judges' and fans' scores give the technical and popular vote equal weight? In practice, no. The reason for this is owing to an imbalance in what the judges and fans are asked to score. Each judge of the panel of 3 rates every performance on a scale from 0 to 10. For all the criticism Len Goodman has received for being too harsh and for Carrie Ann Inaba for docking points when the 'no lift rule' is broken, the judges are no Simon Cowells. By and large, the judges are very generous. In Season 17, the chance of a contestant receiving a score under 6 has been less than 4%.

Fans, on the other hand, are asked to vote for the best performance and are given 5 votes (or the number of votes equal to the number of couples, whichever is smaller) using 3 different methods: phone, text, or online. Assuming each fan gives their maximum votes to their favorite star and assuming there is no gaming of the system (though that has been speculated), then it is equivalent to a fan assigning 15 to one couple and a 0 to all the others. The percentage of votes earned by the public is exactly the percentage of voting fans who thought their couple was 'the best' (however they choose to define it).

Returning to the controversial show in question, based on the judges’ scores, just 6 points separated the highest score of 28 from Remini-Dovolani’s low score of 22. By comparison, each fan can create a 15-point margin between couples, which is comparatively huge! For the judges to score like fans that Monday night, they would have split all possible points between the two couples who were tied for the top position—Milian/Ballas and Corbin Bleu/Karina Smirnoff—giving each 50% of the judges vote rather than the mere 12% that they actually received.

The DWTS voting system combined with the generosity of the judges creates very narrow margins between couples. To illustrate this, I have taken the judges’ results of the night of Milian’s elimination and determined what percentage of the audience vote the lower-scoring couple would have had to earn above the higher-scoring couple in order to be safe for all possible bottom-two couples. You can see that the majority of the margins are 1% or less, and the largest margin, that between Christina and Leah, was just 3%. In other words, a very small percentage of the voting fans are deciding the outcome of each show. Little surprise that there have been a number of instances over the seven year history of the show where dancers have advanced despite multiple low-scoring performances (e.g., Master P in Season 2, Bristol Palin in Season 11, etc.). 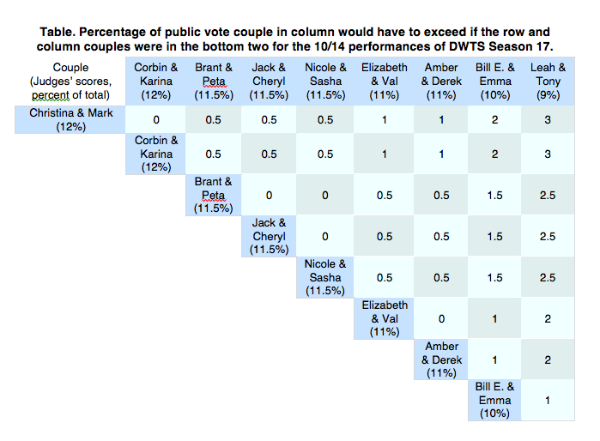 Back in 2010, after the Bristol Palin voting controversy, data savvy Nate Silver detailed the problems with DWTS’s scoring system. He also suggested two reforms the producers could introduce to achieve more balance between the judges’ scores and the popular vote: 1) encourage the judges’ to make finer distinctions, or 2) give fans a best and worst vote. Needless to say that DWTS producers haven’t tried any of these suggestions and, most frustratingly, the actual results of the public vote continue to be withheld.

DWTS producers may be holding on to the current voting system because it distinguishes them from otherwise similar competition shows like American Idol and The Voice, which do not give fans a say until the semi-finals. Or, they might feel that a major change to the format could risk a drop in the ratings of one of ABC’s highest-valued programs. Nevertheless, out of respect for the competitors, who take the contest seriously and want to improve, their partners, who work so hard each season to help novice celebs dazzle on the dancefloor, and the judges, who want the best performers to advance, DWTS producers should give the voting system a makeover. One option would be to use the public vote to save one couple each week and let the judges decide who, among the remaining couples, to eliminate. Even something less dramatic, like using the cumulative score of all performances or the ranks rather than total scores from the judges and public, would be changes for the better.

Until the scoring system is fixed, dancers who want to win DWTS shouldn’t be overly concerned about what the judges say. Losing a point or two for unconventional choreography or a lift here and there could still be a winning strategy, as long as it keeps voting viewers happy.