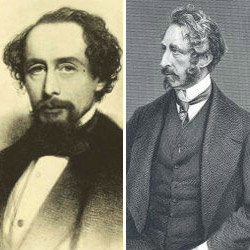 F. Scott Fitzgerald wrote, 'Let me tell you about the very rich. They are different from you and me.' On this Ernest Hemingway commented, 'Yes, they have more money.' Are the very famous writers different from the obscure ones?


This is how I started the article which reported the results of the test, where the takers had to tell the prose of Charles Dickens from the prose of novelist Edward Bulwer-Lytton, who was widely ridiculed for bad writing. The average result of the test was on the level of random guessing. So I finished the article by answering to the above question 'Yes, they have more readers.' The article stirred uproar among literary critics, many of whom vehemently rejected my findings. Recently I found out that my experiment is not the only evidence.

The website goodreads.com contains reader ratings of millions of books including those by Dickens and Bulwer-Lytton. The table below contains ten most rated books by each of the two authors in question ordered according to average rating. By most rated I mean the books with maximum numbers of ratings. One may object that I should have selected the highest rated books. However this way the rare or foreign language editions with a single 5 star rating get on top.

As you can see from the table the real difference between Dickens and Bulwer-Lytton is in the number of ratings (which, one can guess, is proportional to the number of readers). For Dickens’s books from the list this number ranges from 18,624 to 454,445. For Bulwer’s books it ranges between 9 and 684. Even the most read Bulwer’s book is 27 times less read than the least read Dickens’s book from the list. On average, Bulwer’s books are thousand times less read than Dickens’s.

So it is just that indeed. The famous writers just have more readers.