Malevich in London – but is this art? 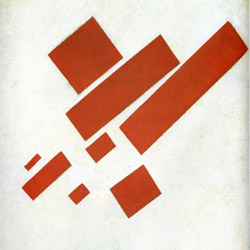 Statistics has a much smaller exposure to art than mathematics. The modern era has lost the renaissance’s passion for knowledge as a whole, which was manifested in, for example, Piero della Francesca’s (1415-1492) studies of perspective. M.C. Escher (1898-1972) is a marginal case: fascinating to mathematicians yet — surely not coincidentally — egregiously sneered at by others.

Still, there are many notable examples of 20th century paintings inspired by mathematics and mathematicians, for example Salvador Dalí’s (1904-1989) 'The Swallow’s Tail' (right) from his series on catastrophe theory. 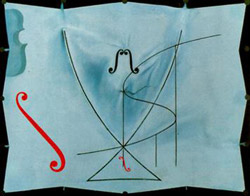 And statistics and statisticians? Perhaps not glamorous enough to be immortalised thus. The closest it gets is probably 'Suprematist painting: Eight red rectangles' (left) by Russian artist Kazimir Malevich (1879-1935)

Two aspects of this painting are evident to any statistician: the subtle randomness of its composition and, yes, Malevich was in all probability a precursor of the boxplot.

Was this the inspiration for a splendid, unnamed mural (below) off Oxford Street in London?
We think so. 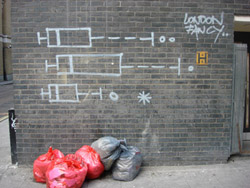 The untraceable artist(s) - possibly called London Fancy? - have shown how we can subvert academia and infiltrate the postmodern urban subconscious. Watch the marginal spaces near you for the coming efflorescence of situationist statistics.