Is pop music eating itself? 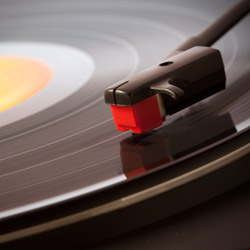 Tomorrow is Record Store Day, the day when independent music stores celebrate the concept of an actual shop selling and playing vinyl records. It was conceived in 2007 as a nostalgic recognition of the way we used to consume music and since then, it has enjoyed incredible success.

The first Record Store Day coincidently came along at the same time that the vinyl record, the zombie of musical formats, began a remarkable revival. The chart1 below shows vinyl album sales in the US from the height of the compact disc’s dominance, right through to the current era of digital streaming. The most striking aspect of the chart is that every time it looks like vinyl is about to die, it comes straight back.

This has culminated in vinyl album sales reaching a 20 year high in 2013, up 33% from the already impressive 2012 figures. So what is going on here? Why are people choosing to invest in listening to music on a format invented when Queen Victoria was on the throne? 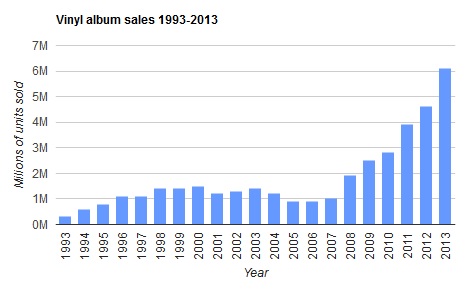 The digital equivalent offers perfect audio, portability, space maximisation plus effortless genre, artist and album switching. Perhaps all these advantages are all too logical for a product that evokes so many emotions in the individual.

The inconvenient drawback of modern music technology is that it has no romance. Choosing an album by scrolling through an iPod menu is too clean and clinical compared to the social aspect of sorting through vinyl albums and admiring the lost art of the album cover design. The sound of the needle hitting the vinyl also has a classic sound that modern digital audio formats have eradicated. This still may not be a good enough explanation though, because it’s not just old audio formats that are in the ascendance, but old artists too.

The table on the right shows the artists with the top 10 grossing tours of 2013, and Taylor Swift and Rihanna are the only artists to emerge in the last 10 years to feature on the list.

In fact the average year for their collective debut album is 1989, that’s 25 years ago now. This phenomenon has been dubbed the rise of ‘dinosaur rock’. Artists with nothing creative left in the barrel now tour with a set compiled from their back catalogue. Some bands even tour advertising that they will only play one album from start to finish.

Another aspect is the fact that we are currently living in the tailwind of the last great musical revolution that came along in the form of hip-hop. Central to this new sound was DJing and the use of the sample. A paper by two Stanford students recently explored how music sampling has influenced the development of new genres through network analysis. They showed how many genres (but predominantly funk and soul) had a major input into the evolution of hip-hop.

Now an old genre influencing a new one is not a new concept I admit. But what happened here, is for the first time the actual music was used and manipulated (from its vinyl original), not imitated with all the variables that this entails.

Today even the digital download has been surpassed with streaming services like Spotify and Pandora using algorithms to suggest similar music to the consumer. But does this easy access to the history of recorded music mean creativity is stunted? For example, two of the ‘freshest’ bands around at the moment are HAIM and Mumford & Sons. Listen to both of these and (not to criticize the quality of the music) what you hear is the unmistakable sound of 1980’s pop and 1960’s folk music respectively.

The documentary filmmaker Adam Curtis recently called the time we are currently living through as ‘static culture’. It’s too early to definitively label what is happening right now in modern music, but the evidence is certainly clear that we have never been more aware of all the music that has come before us. Only with hindsight will we be able to say if this was a help or hindrance to the evolution of music.