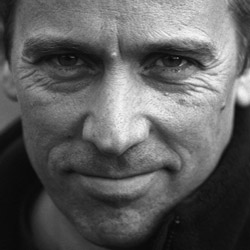 Jasper Fforde (JF): Very simply put: the theory postulates that the observer can and will affect the outcome of events purely by the weight of their own expectations. That is to say that if humans expect that something will happen, then it probably will. Here's an example: the Conservatives and Labour were recently arguing over the best way out of the recession. Was it austerity as the Tories suggested, or increased spending as Labour favoured? Since a recovery is not only beneficial but also expected, expectation-influenced probability theory would suggest that both outcomes would lead to the same result. It's staggeringly simple, really.

Inverse expectation-influenced probability theory (IEIPT) works in the other way. Since most random bad events are unforeseeable and unknowable, if you begin every day thinking you might be killed by a lunatic and buried in a shallow grave on Rainham Marshes, then IEIPT will ensure it doesn't happen – because these things are impossible to predict. I spend most mornings running through my mind all the things that can't happen today because I've already thought they might: struck by a meteorite, run over by a milk van, trampled to death by crazed One Direction fans. It takes me an hour to run through the 793 ways in which I could die – and as proof of my theory not one of them has happened yet.

The idea was first put forward in your novel, The Woman Who Died A Lot. What inspired it?

JF: It was the movie Blade Runner. The future is turning out to look like Blade Runner – night, rain, cosmopolitan crowds, faddy fashions, neon, dystopic, hovercars, bit fascist – and what's more, I think it would not have done so if Blade Runner had not been made. The people guiding how the future looks – the technologists, the designers, the fashionistas – all of us, in fact – now have an expectation that the future will look like that, so are subtly and subconsciously nudging destiny in that direction.

But is it purely a plot device, or do you think it might be applicable beyond the realm of fiction?

JF: Who knows? Novelists have a track record in predicting future events and technological possibilities. Arthur C. Clarke most famously did so with the communications satellite idea. In my kind of writing I tend to chuck a lot of ideas out there. If smarter people like me can build on a notion that I have, then so much the better. Advances in science and technology are always in some way collaborative. Novelists sow seeds, and out of those millions sown, a few may germinate.

The Woman Who Died A Lot also features a National Stupidity Index. Do you think there might be real-world applications for that idea too?

JF: It might be useful to grade global conflicts and problems on a Stupidity Index. Nations could have it, people could have it, the world could have it. Perhaps anyone wanting to be a politician should have a stupidity index score of no less than 78.5, 'generally inclined to be sensible'. There could be a huge board somewhere that extrapolates how dumb we are at present, and transmits it for the world to see.

An average mental age of the planet might help, too. When all that bullshit kicked off in the Crimea I thought: 'Hmm, the average mental age has just dropped from its seasonal average of 13.34 years to 13.16, which pops us just below the "Oh, for Pete's sake" threshold.'

With all these statistical indices and probability theories, do you ever think you might have preferred a career as a statistician to that of a writer?

JF: Ooh, probably. Stats and maths are great fun, but it would probably have made me 'quite sensible' (index: 58.4) rather than the 'mildly dopey with flashes of sound reason' person I am at present (index: 51.3). I prefer where I am.

Jasper Fforde will be speaking about expectation-influenced probability on 4 November at 'A Very Unlikely Event', a meeting organised by the Quality Improvement Section of the Royal Statistical Society.