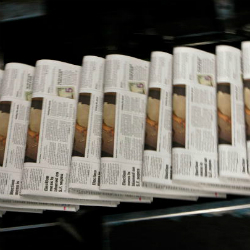 
While organisations such as the BBC do provide basic statistical training, universities offering journalism courses do not explicitly mention training in this area.

This was the initial finding of an analysis, conducted by the Royal Statistical Society (RSS), which was commissioned by the Department for Business, Innovation and Skills to investigate the state of science journalism provision in institutions across the UK. The RSS work was designed as a follow-up to a 2009 report1 on the same topic (led by the Science and the Media Expert Group). It sought to discover, based on initial online research, how much statistical training was offered to journalists and whether this situation was changing.

Tools of the trade

One might assume that journalists would be taught some statistical basics during training, before going on to expand and evolve their knowledge of the subject throughout their career. But initial research suggests this may not be the case - or if it is, it certainly is not shouted about. Of the 374 undergraduate journalism courses offered through the Universities and Colleges Admissions Service, not one mentioned statistics as a core module, or had it listed in any of the course overviews. This state of affairs was mirrored in postgraduate courses, where course information taken from the UK Postgraduate Application and Statistical Service search engine contained no mentions of statistics.

However, as this research was preliminary and based predominantly on online information, it cannot be said definitively that there is no statistical training offered. Indeed, after contacting several journalism course administrators, it would seem that statistics training is sometimes included - even if it is not mentioned explicitly.

Paul Bradshaw, investigative journalist and leader of the MA in Online Journalism at Birmingham City University (BCU), is not surprised that statistics is not listed or taught as a separate module. 'Journalism courses are under enormous pressure to fit more and more topics into their syllabus, so having an entire module devoted to statistics would be a very odd decision,' he explains. 'It's more likely that statistical education is integrated into other modules,' he says.

At BCU, students now have three classes devoted entirely to statistical methods, according to Bradshaw, and therefore do receive some education in this area. Nevertheless, there is still a lack of clarity and communication from university websites that statistics is an element offered in journalism training.

Could this be about to change? Might there be a looming paradigm shift? Websites like Nate Silver's FiveThirtyEight and the New York Times's The Upshot are creating reader demand for data-driven journalism - and this in turn is creating opportunities for journalism students and practitioners to become more statistically literate, and revel in the factual solidity of data-based articles.

Of course, stories based on numbers are not an entirely new phenomenon - though they are growing in popularity. Professor Richard Keeble is the author of a recent book analysing this expansion, entitled Data Journalism: Mapping the Future. He explains that 'some form of quantitative journalism has been around a long time'.2

'What's different now,' he says, 'is the amount of numbers that we have available to us. It's the quantity of data, and the invention of various programs which are allowing creative, aesthetically pleasing representations of this data.' Programs such as Datawrapper allow quick visualisations of data into charts, while others like CartoDB and Tableau provide platforms to create interactive maps out of information.

This heady mix of available data and easy-to-use tools is stoking a hunger within mainstream news outlets for data journalists, and courses which focus on or include data training are cropping up all over the UK.

But as yet there are no specific UK university courses on data journalism, though various degrees are offering it as a module - our research identified four such undergraduate courses and seven postgraduate degrees. Meanwhile, a new MSc in Computational Journalism at Cardiff University starts this year and includes both data journalism and coding training.

Journalism course leaders at several institutions mentioned that they were reviewing their courses, and were considering introducing data journalism as a core component or module. 'I expect this will develop in the same way that online journalism teaching has,' explains BCU's Bradshaw, 'as more people with the relevant skills make their way into universities, and curricula are updated to reflect wider practice.'

These courses will inevitably involve at least some training in number management and statistical inference, and the movement may have a positive effect on the state of statistical knowledge. 'I definitely think that data journalism training should have an impact on statistical literacy,' says Bradshaw.

There are also several free online routes into data journalism, which are available to anyone with an internet connection and a curious mind. One of these courses, 'Doing Journalism with Data', is running until 31 December and offers a key module on newsroom maths and statistics. At the time of writing there were 23 766 students enrolled in the course.

Data journalism aside, there are also ample online opportunities for journalists and members of the public to learn about statistics, with the only cost being the necessary time investment. The RSS research found 12 free online statistics courses, and there are potentially many more. Therefore, while there may not be extensive training in statistics within journalism courses at present, those with the will to pursue such knowledge will most certainly find a way.

A more in-depth report by the RSS will be released later in the year, which will explore statistics training provision in more detail.