How many turkeys are eaten on Thanksgiving? 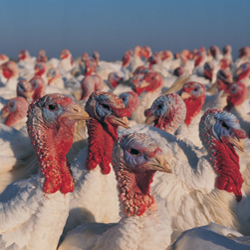 It's Thanksgiving in the US and I am preparing myself for a hearty meal of turkey, sweet potatoes and cranberries followed by pumpkin pie for dessert. I wonder to myself 'how many turkeys are eaten on Thanksgiving?

With a quest to answer this question I start googling. Did you know that the US is expected to raise 242 million turkeys in 2010 (with Minnesota topping the list at 47 million), produce 735 million pounds of cranberries (Wisconsin producing 435 million), 1.9 billion pounds of sweet potatoes (North Carolina producing 940 million), and 931 million pounds of pumpkins (Illinois producing 429 million)? All of this information is directly accessible to everybody from the census.gov website.

This information is compiled from various sources, but much of it comes from the United States Department of Agriculture (USDA). Within the USDA is a service called the National Agricultural Statistics Service (NASS) which collects, compiles, and reports data such as that shown in the figure which was taken from the yearly Turkeys Raised report.

US turkey production from the USDA

It would be too onerous for NASS to try and actually count every turkey that is raised in the US and so therefore NASS collects data from approximately 1,000 randomly chosen turkey producers. In this sample, large turkey producers have a greater chance of being selected for the survey since they will have a larger impact on the total. Since NASS is using a sample, there is error due to not including all turkey producers. This error can be quantified and is on the order of 2.2% or about 6 million turkeys. Statistically speaking we would say 'we are 90% confident that the true number of turkeys raised in 2010 is between 236 and 248 million'. If this range is unacceptably large, then we should take a larger sample.

So what about my original question: how many turkeys are consumed at Thanksgiving? It turns out this information was not nearly as easy to find. Some sites suggest the number is 45 million, but other sites think this number is high. What we would need to answer this question is a sample of American households.

P.S. The USDA also has a blog with some Thanksgiving advice. Perhaps too late for this year, but they provide a Thanksgiving checklist and a guide to buying the turkey.