The colours of paintings: blue is the new orange 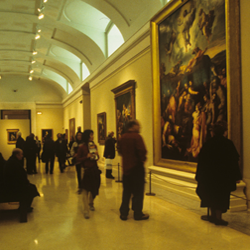 I recently came across a couple of blog posts on the colours used in movies, where the colours were extracted from either movie posters or the actual frames of trailers. I was inspired to try something similar with paintings, where we have data for a longer period than the era of film.

There is a bunch of different websites where you can access (photos of) paintings. Such as the BBC, Google Art Project, Wikiart, Wikimedia Commons and various museums. One of my favourites is the BBC Your Painting’s site where you can browse through over 200,000 well organised paintings - an amazing resource. For many of these there is also information on the year they were painted, the artist and so on.

So I set out to visualise the colours in paintings over history and see if there is any pattern as to the popularity of colour through the centuries and decades.

In order to this, I first needed to scrape the images of the paintings from the site. I could then then extract the relevant information, clean the data, categorise it by year and medium and lastly plot it. (I have detailed my code and the technical steps for this on my blog.)

I could then finally analyse the images. For each year, I loaded the images painted that year, and converted them from RGB colour space into HSV (hue, saturation, value). I separated the H, S and V components and added together the values for the images from that year. If I used the data from every pixel in every image, this would take too long and would also bias the results towards larger images. So I randomly chose 100 pixels from each image. (I re-ran the script a couple of times sampling different pixels, which had no visible effect on the final results).

Plotting the colours over time

This is the result of my analysis of 120,013 paintings. I added a histogram on the top to show the number of images used for each year.

The spikes at each decade might be because of uncertain dating being registered as an even decade. The majority of paintings are painted between 1800 and 2000. So, let's zoom in on that period. Here is the same plot for the period 1800 to 2000 (based on 94,526 paintings.)

There seems to be a reliable trend of increasing use of blue in paintings throughout the 20th century. Actually almost all colours seem to increase at the expense of orange. But let’s focus on the increase of blue.

The most popular proposed explanation for this trend among my friends and on social media seems to be:

Although interesting, I find the first explanation the least likely. Blue might be new, but not as new as the 1800s. Look for example at the presence of the word blue in 19th and 20th century books in Google Ngram viewer. However it definitely seems to have increased in frequency relative to other common colour words.

Since these plots ignore the saturation and value (in the HSV representation of the colours), we can also visualize how these change over time to see if it is the case that darkness increase over time.

So it looks like the colours are getting brighter over time, which speaks against the effect being driven by an increased use of dark colours or black.

The third suggestion is probably a better candidate. Although, if this is true, why does the apparent linear decay of blue suddenly stop? But maybe different blue pigments fade to different degrees and rates, and older paintings used more lasting pigments?

By sorting out the different techniques used in these paintings, we can investigate if the amount of blue in acrylic paintings also changes over time. Out of the 121,312 paintings fed into the analysis (1,299 of these were excluded from analysis, but let us ignore that for now) 110,042 used oil, 5,442 acrylic, 1,035 tempera and 4,793 other/mixed.

Let’s look at the plot with only the acrylic paintings, to see if we get a different pattern.

This result is based on 5,250 acrylic paintings. Here there is no clear trend of increasing blue from the 1960s to the 2000s. Also the amount of blue is much larger in these images.

The result from only the oil paintings is here.

Removing the other techniques does not change the pattern for the oil paintings (this plot is based on 109,209 images.)

I haven’t found any data on the historical price of blue paint, so that explanation is hard to elaborate on. However, it is not only blue that increases but all colours except orange, which might speak against the pigment prices explanation.

Of course the changes in colour might be a result of a combination of factors. One of these could of course be trends in the use of colour. If we assume a smooth linear deterioration of certain colours in oil paintings, it would be possible to subtract that change and study the short term fluctuation in colour use. For example the marked increase of blue at the time of the First World War, might actually reflect a true trend in colour use.

The BBC archive contains mostly British paintings and almost exclusively European paintings. It would be fascinating to find images from a broader range of countries to see how colour use evolved in different cultures. Comparing trends between cultures might then also be a way of controlling for the mere effect of aging of the paint.