Who is the hardest working star in stand-up comedy? 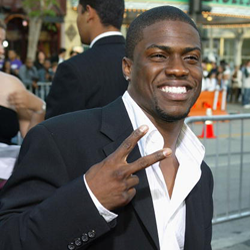 Stand-up comedy is big business, at least at the top of the game. Kevin Hart’s ‘What now?’ tour this year is set to break all kinds of records. During his last tour, he became one a handful of comedians to sell-out Madison Square Garden and this year he is back there with three shows. Then he will end the tour in his native Philadelphia as the first comedian to headline a show in an NFL stadium. Kevin Hart is undoubtedly the biggest star in stand-up comedy right now, but who is the hardest working?

The fact is, stand-up comedy is a hard job. A comedian may get lucky enough to have a hit DVD that rakes in the money, but they really have to toil away to get there. They have to constantly produce new material, put in a brilliant performance (night after night) all while constantly living on the road.

The hardest working comedian in the US is…

You can’t deny that Kevin Hart is working hard for the millions he will bring in from this tour. But Brian Regan beats him for both number of shows and the amount of miles covered going city to city. 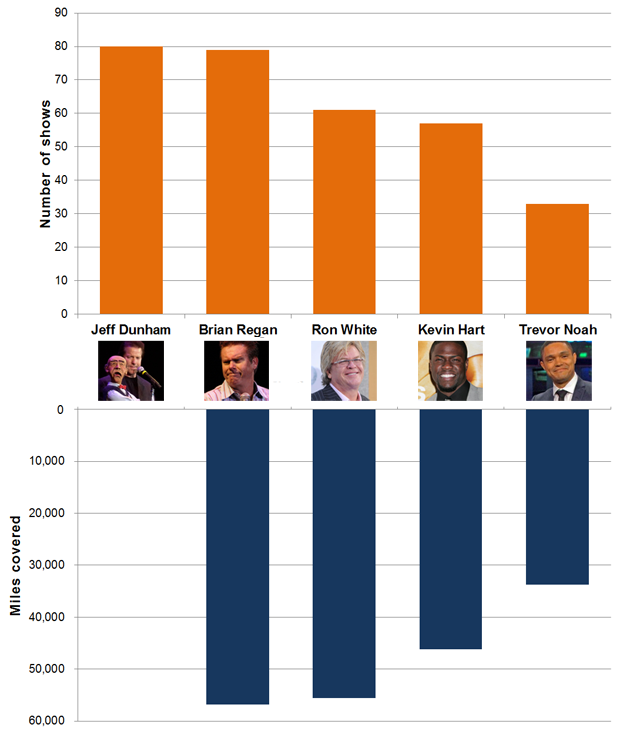 Ron White comes close, but he has the security of multiple dates at The Mirage Hotel in Las Vegas. During his nationwide tour, he will keep interrupting the schedule to make the trek back to Vegas for that reliable pay-cheque, boosting his mileage figure.

Working even more efficiently is Jeff Dunham, who has 80 shows scheduled, all at Planet Hollywood in Vegas. To be fair to Dunham, he is a world record holder for the most tickets ever sold for a stand-up tour.

Trevor Noah also deserves a mention. He is performing far fewer shows than the others, but these are spread across four continents giving him an impressive mileage. With that kind of crossover appeal, it’s not so hard to see why he will be taking over from Jon Stewart on the Daily Show.

That gig is pretty intensive in itself, Stewart may not have been on the stand-up circuit for years, but the Daily Show requires its host to make around 160 episodes every year, albeit from the comfort of a Manhattan TV studio.

The hardest working comedian in the UK is…

The work rate of comedians on this side of the Atlantic puts the average American comic to shame. The distances travelled might be a fraction of what a US comedian has to cover, but the biggest comedians touring the UK and Ireland visit even the most regional venues.

Even the moneyed Michael McIntyre will be doing 77 shows, but the title for hardest working comedian probably has to go to the only female on the list, Sarah Millican. 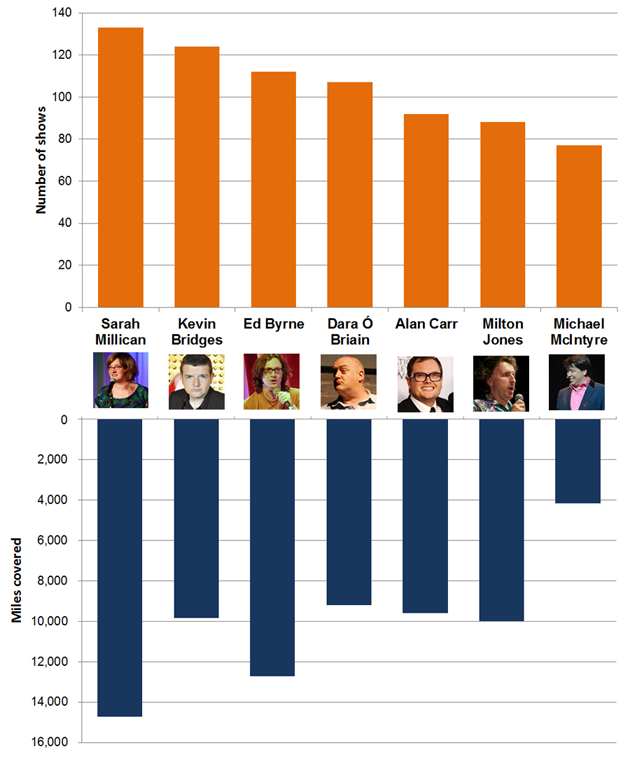 Millican deserves the title as she will be almost constantly on the move during her tour - her longest stop will be four nights in her native Newcastle. Kevin Bridges on the other hand has the luxury of multiple nights in cities like London, Glasgow, Manchester and Dublin. He even has five nights booked in the small city of Derry in Northern Ireland.

So there you go, next time you see a stand-up comedian, spare a thought for the amount work it takes to constantly travel between cities, make an audience laugh every night and then sleep in another identical hotel room. Or don’t, after all Kevin Hart is so rich he can fly in his own private jet to take the sting out of it all.