Statistics in court: An interview with a juror 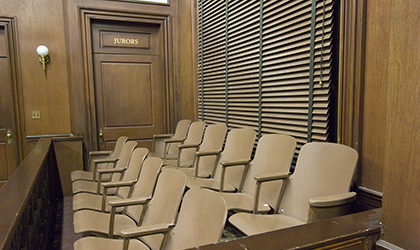 Statisticians have a crucial role to play in ensuring fairness and justice in the legal system, particularly where the assessment and interpretation of forensic evidence is concerned (see our April 2019 special issue for more on this topic). In court, statisticians may serve as expert witnesses – but they may also find themselves serving in an entirely different capacity: as a member of a jury.

This is the position Kelly Zou found herself in last year, when she was selected to hear a murder trial in New York City. In the Q&A that follows, Zou – a statistician and editorial board member for Significance – reflects on the experience.

What was going through your mind when you found out you’d been selected for jury service?

When the court called out the names of those who were picked as the first few jurors, I could hardly believe it. My heart was pounding so fast. There was a mixture of excitement and dread on my part because jury duty meant a big upheaval to my regular working life. The justice asked us not to conduct any research on our own but to expect several months of full-time attendance, four days a week. The remaining day per week was spent at our usual routine, such as going to work or university. However, none of the jurors were allowed to discuss the case with anyone, not even among fellow jurors, family members, or colleagues at work.

Tell us about the process you went through to get selected?

All those summoned to the court were required to complete a questionnaire and report self-identified ineligibility, such as conflicts of interest or hardship. On another day, the prospective jurors spontaneously raised issues with the judge that forbade them from serving, such as language barriers or being biased by news media reporting on a high-profile case. Eighteen people were randomly called among those who were not disqualified. All eighteen potential jurors passed around a microphone and answered sharp and sometimes awkwardly private questions from both sets of counsel; prosecution and defense. A few days later, twelve jurors were finalized, with seven additional alternate jurors, but one of the latter dropped out soon afterwards due to personal reasons. Thus, the final jury consisted of eighteen members. Throughout the course of the trial, we were all required to attend court unless one or more was excused or eliminated due to various reasons. One juror dropped out, but the reason why was never explained to the rest of us.

What was the reaction when you told the court you were a statistician?

During voir dire, I defined what real-world evidence meant and said that I was an analytic science lead at the time. The transcriptionist asked me to repeat these words, so that they could be recorded accurately. The court asked whether I would be open-minded and hear the evidence presented. I confirmed that I would. My statistical trainings appeared to be well-accepted.

What aspects, if any, of your statistical training or skillset did you think might come in useful when serving on a jury?

Juries must weigh all of the evidence presented across a wide spectrum of witnesses and decide on multiple charges. The complexity of reaching the decision is that it would be a trichotomy: guilty, not guilty, and not responsible by reason of mental disease or defect. Given the preponderance of evidence, and the standard of proof being “beyond reasonable doubt”, it was stressful trying to reach a verdict. When we finally did, it was a moment of indescribable relief, which made me appreciate the concept of significance in the context of criminal law, as well as the tradeoff between Type I and Type II errors under the framework of hypothesis testing.

And what aspects of your training did you think might work against you in the jury box?

The prosecutors and the defense lawyer led us through a comprehensive journey of scientific investigations, including 911 call recordings, crime scene investigations, DNA analyses, knife pattern analysis, suicidal wounds, medical images, blood samples, medical records, epidemiological research, foreign language translation of cognitive tests, missing responses of cognitive test items, phone records, text messages, video analysis, etc.… the list goes on. As a statistically-trained juror, it was tempting to cross the fence into the realm of being an expert witness. It was also habitual to consider possibilities outside the framework of the evidence presented before the jurors, so I had to be disciplined in not considering any additional data from outside the court. In other words, one must keep his or her own reasonable judgement, and yet not to go overboard or think “outside the box.”

The differences in ways of processing information were quite apparent. The evidence being presented was through the form of storytelling, which could be consistent or inconsistent across multiple sources, transcripts and records. In a statistical context, for example, a raw data set is often presented in front of an analyst, whereas in court the evidence is embedded in endless texts, statements and conversations. Without seeing all of the data in a matrix form consisting of statistical variables, or using any analytical software tools such as R or Python, or visualizing through graphics, a statistician or data scientist is forced to be a good listener and make inference based on words and texts.

Where there any particular frustrations, such as not being able to ask your own questions or conduct your own research?

A key frustration for an extrovert person like me was the requirement for passive listening, which was almost sleep-inducing. I found it to be a draining experience. Each cross-examination was like a wild goose chase; only in the very last moments, as all the pieces of the puzzle came together, would we arrive at an “Aha” moment.

What did you gain from the experience? Is there anything that you could take back and apply to your work as a statistician?

I exhaled after the verdict was reached and was keen to put my jury experience behind me and pick up the pieces of my life again. It was draining and taxing on my mind, body and soul. Surprisingly, I did not have sleepless nights or horrible nightmares, given what I had viewed, heard, and learned as a juror. But I do wish that there could be an artificial intelligence to help jurors sort out the sequence of events at time points, and to identify consistencies and inconsistencies among different testimonies. The key takeaway for me was that I appreciate the power of storytelling in data science now more than ever. I also marveled at the wonders of DNA testing and probabilistic interpretations of results.

Overall, do you feel there is a place for statistical skills and experience – and statistical thinking, more generally – in the jury box?

Yes, there certainly is. Statistical and, more importantly, critical-thinking skills helped me as a juror to synthesize weeks of data presented in the form of storytelling and back-and-forth arguments. As a critical tool, statistics enabled me to be impartial with sound judgement.

Kelly H. Zou, PhD, is vice president and head of medical analytics and insights at Upjohn, a division of Pfizer Inc.

The views and opinions expressed in this article are Dr. Zou’s own and should not be attributed to Pfizer, its directors, officers, employees, or affiliates, or any organization with which she is employed or affiliated.