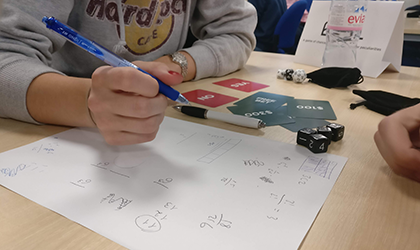 Imagine you hold three six-sided dice in your hand. Now throw them, and before they come to a stop, answer me this: do you think you will roll at least two of the same number? Yes or no. More importantly, how much do you want to bet on that outcome?

That is how our game of Borel begins. Dr Christoforos Anagnostopoulos, the game’s co-designer, starts a timer. We have three minutes to make a decision. I look over at my teammates. One starts sketching out some calculations on paper, trying to work out the probability of rolling at least a double; another pulls out a laptop, boots up R and tries to code his way to an answer. All I have to go on is my intuition. I think that rolling two or three matching numbers is somewhat less likely than rolling three different numbers. But I could be wrong. Human intuition is a notoriously poor judge of probabilities.

These flaws of intuition are partly why I find myself sitting in a room at Imperial College London, betting on the outcome of a dice roll. Simple experiments like this are meant to help people become adept at intuiting probabilities, chance and randomness. That’s one of the aims of Borel, a board game developed by Anagnostopoulos, a statistician, and his co-designers Spiros Doxiadis and Angelos Favros.

Players (or, in our case, teams) start the game with 4,000 imaginary dollars. Each round involves a new question, and each question presents a new experiment to try – whether it be dice rolls, coin flips, or the drawing of coloured balls from bags. Before each experiment, players (or teams) are challenged to try to figure out the odds of an outcome and bet accordingly. They must bet each round, either $100, $300 or $800. Lose all your money and you are out.

The game takes its name from Émile Borel, a French politician and mathematician and one of the fathers of probability theory. If you recognise the name, you might well have the mathematical training necessary to figure out the odds for each outcome. But mathematical ability is no guarantee of victory. Whether you guess the odds or calculate them, there is no such thing as a sure bet. Randomness is at work, and that is where the excitement – and the strategy – comes in.

“Events with probability 30% happen all the time in life,” says Anagnostopoulos. “So, just because the probability of an event is above 50%, that does not make it safe to assume it will happen.” He says it is up to the player to decide whether to bet with, or against, the odds. If you think your competitors will bet one way, and there is a 20% chance it will go the other, it might be worth taking the risk. Get lucky and you may race ahead of your competitors. But you need to be careful with those sorts of gambles, as players can ask for a limited number of “reruns” of an experiment – and if the odds are not in your favour, a chance win can quickly turn to defeat.

Borel exposes players to the notion of risk, says Anagnostopoulos, “and through the game mechanics and the excitement of running the actual experiment, they understand that risk is not something to be afraid of; it’s something to play with”.