The Welfare Benefits Up-rating Bill and its historical precedent

Written by Andrew McCulloch on 09 January 2013.

I paid close attention to the debate in the House of Commons yesterday when the Welfare Benefits Up-rating Bill was discussed. The Bill limits the rise in most working-age benefits to 1 percent for three years from 2013-2014. If CPI inflation remains at its current level of 2.5 percent, a 1 percent rise in benefits will be a fall in real terms. Whatever one makes of the policy, a proposal to cut out-of-work benefits will cause the Labour party considerable discomfort.

Is US unemployment really 7.9%?

At the time of writing and assuming we don’t have a repeat of Florida 2000, The US presidential race will soon come to a close. The most recent Gallup national poll has Obama up among registered voters 49% to Romney’s 46%. If you read Gallup’s description, on its website of how they conduct polls, you’ll find that their findings have a margin of error of ± 4 percentage points. Applying this to the Obama and Romney figures, this means that Obama’s 49% is really 45%-53% whilst Romney’s 46% is really 42%-50%. Given that these two intervals overlap, many describe these findings as indicating a statistical dead heat. A key issue the two candidates are arguing over in the final push is that of the economy and jobs. 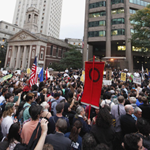 I currently teach at The Silberman School of Social Work at Hunter College located in New York City. Most of the students I teach are working on a masters’ degree and came to social work school to be clinicians. That is, once they graduate, they’d like to work with clients to help them deal with depression, bereavement, stress, and other maladies of living in the modern or, perhaps, post-modern world. I don’t teach the courses that would directly prepare my students for clinical work. Instead, I teach the ones that perhaps many of them went into social work to avoid – public policy and economics.

The rural revolution: how technology has changed farming

The BBC report today that "England could spice up its food production by growing more herbs and spices, says a report looking at the nation's future food security", whilst Chris Rhodes charts agriculture in Britain over the last century in our continuing series of extracts from the upcoming book, Olympic Britain. Olympic Britain shows through statistics the changing face of Britain since the previous London Olympics of 1908 and 1948.

The colour of e-money

As the saying goes, "money talks". But money, and especially electronic money, does more than just talk. It says a lot about you, about your way of life, your wealth, your habits, your movements and more. Take your credit or debit card, for example. We are accustomed to using them freely, unaware of the fact that by using them we leave a trail of information with each transaction. Such information, if used sensibly to analyse our spending habits, could result in better knowledge of citizens’ behaviour and in new and better services for citizens and commerce.