Not long ago, on the PBS program “NewsHour”, I was listening to David Brooks, Op-Ed columnist for the New York Times, talk about politicians’ apparent inability to differentiate between a million, a billion, and a trillion: “They should put a poster up in Congress to show the difference between a million, a billion and a trillion. Our problems are in trillions. And to argue about millions, it is pointless."1 Which made me think: “How many people can really conceptualize or visualize the difference between such large numbers? Come to think of it, can I?” 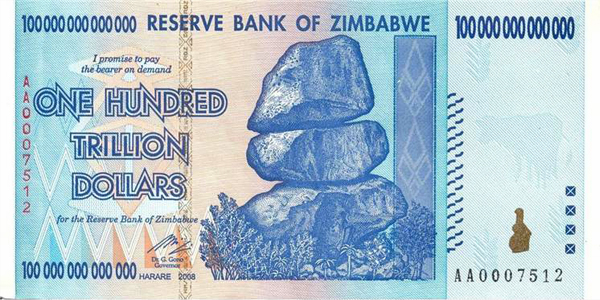 Fortunately, there are some nice graphics on the web that help; one that I like is at: www.pagetutor.com/trillion/index.html. It shows a packet of 100 $100 dollar bills – total value $10,000 – which would fit neatly into a back pocket. 100 such packets would make $1 million – for which you would need a suitcase, as this article in September's Significance magazine shows – and to make a billion dollars you would need ten standard builders pallets loaded up with such bundles – coming roughly to the height of a man. But a trillion dollars is a thousand such pallets and looks, in their illustration, aircraft-hangar sized. (By the way, I’m referring here to the “short scale” (billion=109, trillion=1012), which most English-speaking countries now use, as opposed to the “long scale” still used by European countries.)
The difference between a billion (10 pallets, each with a $100 million) and a trillion (1000 pallets, double-stacked) is especially impressive in their illustration – scary, actually. The U.S. national debt, for example, is steadily ticking away toward $15 trillion – have a look at www.usdebtclock.org, which has more than you need to know about U.S. financial woes (and if flash photography upsets you, then beware – the rapid turnover of numbers here might too!). To paraphrase former Illinois senator Everett Dirksen: “A trillion here, a trillion there, and pretty soon you're talking real money.”
(Actually, he probably never said “A billion here, a billion there, and pretty soon you're talking real money”, but as a strong fiscal conservative he certainly could have.)
But if US fiscal debt worries you, be thankful that you do not live in Zimbabwe, where hyper-inflation took off in the last decade. In 2008 the Reserve Bank of Zimbabwe issued the note pictured above.
But even the hundred trillion Zimbabwean dollar-bill does not tell the whole story, because the Zimbabwean dollars concerned had already been re-denominated (for which read re-defined) three times; each dollar of that bill is worth 1013 original, pre-2006 Zimbabwean dollars - so our note is equivalent to 1027 pre-2006 Zimbabwean dollars. Seeing that the pre-2006 Zimbabwean dollar was at one time on par with the US dollar, that single banknote would have more than paid off the US national debt – if only hyperinflation had not intervened to make it worth... absolutely nothing. (Zimbabwe, in case you were wondering, has now officially abandoned its own currency; Zimbabweans use the currency of any other nation that they please.)
Some other big numbers, pulled pseudo-randomly from the Internet: 3.3 billion people (half the world’s population) live in areas at risk of malaria transmission in 109 countries and territories. In 2008, malaria caused an estimated 190 - 311 million clinical episodes, and 708,000 - 1,003,000 deaths.2 Each year, over 9 million people around the world become sick with tuberculosis, and almost 2 million die.3 And one more, just released: about 46.2 million people in the U.S., or nearly 1 in 6, are living at or below the poverty line. That’s up from 43.6 million, or 14.3 percent, in 2009, and is the highest level since 1983. The number of people lacking health insurance increased to 49.9 million, a new high after revisions were made to 2009 figures.
What’s the point of all this? I’m concerned about public “Innumeracy”, also known as “Quantitative Illiteracy”, a condition that affects millions of adults on both sides of the Atlantic, according to recent surveys. About 22% of the American population scored at the lowest levels of quantitative literacy, according to the U.S. Department of Education’s Adult Literacy Survey. In the UK, the Vorderman Task Force reported that 24% of working adults are "Functionally Innumerate". These days we are deluged with data, but we don’t seem to have the right mental equipment to make sense of it all. We are, literally, drowning in numbers. Is the condition treatable? I’m not sure - humans have an innate number sense, but this is approximate and limited and just may not be capable of handling such large quantities. Nevertheless, we can surely do a better educational job than we are now. “Quantitative Literacy”, which is even more fundamental than mathematical or statistical literacy, has several components, but key ones are the ability to interpret data and draw correct inferences. Shouldn’t we make this a basic and integral part of our education curriculum, beginning in first grade?
"Statistical thinking will one day be as necessary for efficient citizenship as the ability to read and write." [H.G.Wells ]
And by the way, in the time it took me to write this, the U.S. national debt has increased by ….. well, I hesitate to tell you how many millions of dollars – it just blows my mind …..
back to top