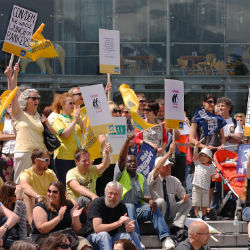 One of the top news stories of this week has been the publication of findings by the Office for National Statistics (ONS) showing that the average public sector worker receives an hourly wage that is 7.8% higher than that of the average private sector worker.
Not only that, but this gap has increased from 5.3% in 2007 (that is, across the recession), with this news coming just a week after the public sector strikes of the 30th June. On the face of it, this certainly looks like an ungrateful group of workers who don’t appreciate the generous working conditions that their employers have provided for them.
However, this headline statistic is only one of a number of findings in the article, which also explains that among employees with degree level qualifications, the average public sector worker’s hourly wage is actually 5.7% lower than those with degree level qualifications in the private sector. Findings such as these could have serious implications for the effects of some of the government’s spending cuts, as well as the planned increase in university fees.
The article is based on data from the Labour Force Survey (LFS) and the Annual Survey of Hours and Earnings (ASHE); the authors have used a linear regression of log-hourly earnings to attempt to pinpoint the difference in public and private sector pay by holding for the effects of other key factors including age, gender, occupation, region and qualification.
Other key findings from the report include the following:
The article also acknowledges that the analysis is narrow in its remit – the data looks at employees only, excluding the self-employed, and only includes information on additional payments such as bonuses if they were paid in April (this is the month that the ASHE data collects information on). It also notably does not collect information on pensions benefits.
The statistics regarding qualifications show that the public sector has a much higher percentage of people educated to degree level – 38% compared to 23% in the private sector in 2010. However, the proposed increase in university fees will mean that post-qualification earnings will become considerably more important for the students lumbered with a potential £30,000 student loan debt. The government must therefore bear in mind that by not offering competitive pay for those with degree level qualifications, the public sector could stand to lose the highest calibre graduates to the private sector, and changes to the pensions packages could further exacerbate these differences.
References
back to top