The Welfare Benefits Up-rating Bill and its historical precedent

Written by Andrew McCulloch on 09 January 2013. 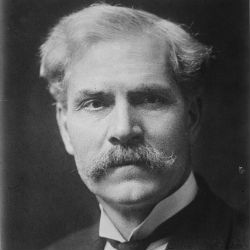 I paid close attention to the debate in the House of Commons yesterday when the Welfare Benefits Up-rating Bill was discussed. The Bill limits the rise in most working-age benefits to 1 percent for three years from 2013-2014. If CPI inflation remains at its current level of 2.5 percent, a 1 percent rise in benefits will be a fall in real terms. Whatever one makes of the policy, a proposal to cut out-of-work benefits will cause the Labour party considerable discomfort.
In addition to the hardship the policy will cause among many of its traditional voters, the Labour Party will not want to be reminded that it split in 1931 when the Cabinet could not reach a collective decision about a cut in unemployment pay. Labour had been the largest party at the 1929 election but did not have an overall majority and governed with the support of the Liberals. The world economic crisis (the Wall Street crash and subsequent 1929-1934 Depression) had a particularly severe impact on the UK economy and gross domestic product (GDP) fell by 4.6 percent in 1930-1931 (not unlike in 2008-2009). The response proposed by the Treasury, and the Labour Chancellor Philip Snowden, included a cut in unemployment pay of 20 percent but the Cabinet could not reach agreement on whether to support the policy. The Prime Minister, Ramsay MacDonald, and leading colleagues then deserted the Labour Party and formed a National government with the Tories and Liberals. They then cut unemployment pay.
The current Bill is unlikely to split the Labour Party. All politicians are looking for ways to reduce the level of spending on benefits given that total spending on benefits amounted to £159 billion out of total spending of £695 billion in 2011/12. It is less certain how many Labour MPs agree with the Chancellor that a reason for limiting future increases in the level of benefits is fairness. In the Autumn Statement on the 5th of December, for example, the Chancellor argued that it was "not fair to working people" that out-of-work benefit rates had risen by 20 percent since 2007 while average earnings have risen by only 10 percent. Rather than debating what is or is not fair, I want to look briefly at the notion that the relative gap (rather than the absolute gap) in incomes should be what we consider fair.
The figure below from the DWP shows the distribution of equivalised net household income in the UK in 2010/11 (full data here). Net income is calculated as the total household income from all sources (earnings, benefits and investments) minus all taxes paid and divided by a scale factor in order to take into account differences in need between households of different size. It is also preferable for most purposes to also adjust for housing costs because of the variation in the cost of housing across the country. 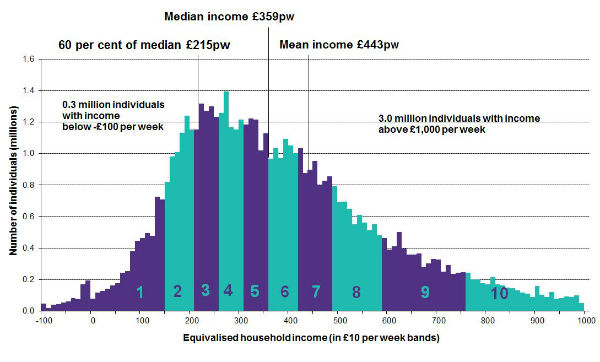 The figure shows that in 2010/11 median household income was £359 per week while the bottom 10 percent of households had incomes of less than £150 per week. The poverty line used in official statistics is 60 percent of median household income and using this criterion slightly more than 20 percent of households were in poverty in 2010/11. In order to consider the question of whether proportionate changes in incomes for all households are clearly fair, we will calculate the effect of a 10 percent increase in income for households in the bottom and top deciles of the income distribution. For a household in the bottom decile (with an income of £100 per week) a 10 percent rise in income would give the household an extra £10 per week, while a household in the top decile (with an income of £800 per week) would get an extra £80 per week. In relative terms there has been no change in the incomes of the two households, but in absolute terms, the gap in household incomes has risen from £700 per week to £770 per week. The simple reason for the rise in the absolute gap is that a 10 percent increase in income is significantly greater in magnitude at the top than at the bottom of the distribution. The situation that the Chancellor considers unfair would give £20 (rather than £10) to the low income household while the well-off household would still get an additional £80. Is that transparently unfair?
It is not a surprise that different people have different opinions about the fairness, or otherwise, of changes in the level of welfare benefits relative to average earnings. It should be recognised, however, that the approach used to measure changes in the difference between the level of out-of-work incomes and average earnings contains an implicit judgement about what is desirable. If we think that the level of benefits should change to maintain relative differences in living standards then, because incomes tend to rise over time, this will imply increasing differences in incomes between households. If we take the opposing view that it is absolute (rather than relative) incomes that matter for living standards, as it certainly is for most people on welfare benefits, then the proposal to limit the rate of increase in benefits seems to be unfair to people on low incomes.
The decision by Ramsay MacDonald to join a government with the Tories in 1931 was considered an act of treachery by the Labour Party. The electorate didn't see it that way, however, and the National Government was re-elected in October 1931 and 1935. The lesson would seem to be that although fairness is absolutely necessary as a principle, on its own it doesn’t appear to attract sufficient support from the voters to provide a practical basis for government.
back to top