A short overview of the Phillips Curve 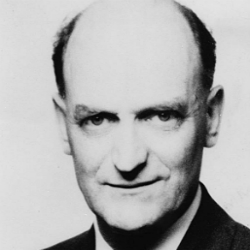 In modern economics, central banks around the world have become engrossed in closely monitoring the rate of inflation in their respective economies. One of the major theories that has informed the debate on controlling inflation is the Phillips Curve.

In an article in Economica in 1958, AWH Phillips suggested that there was a relationship between changes in wages and the level of unemployment — the lower the unemployment rate, the higher the rate of change of wages,¹ Since then, the Phillips curve has attracted a lot of theoretical analysis.²

Its main implication is that, since a particular level of unemployment in the economy will imply a particular rate of wage increase, the aims of low unemployment and a low rate of inflation may be inconsistent.

Alternatively, a government can attempt to bring about basic changes in the workings of the economy. For example, a prices and incomes policy, in order to reduce the rate of inflation in a way that is consistent with low unemployment.

Phillips plotted a scatter-plot of dispersed data points (x, y)
where x = the percentage unemployment rate
and y = the percentage change in wages
relating to the United Kingdom for the years 1861 to 1913. 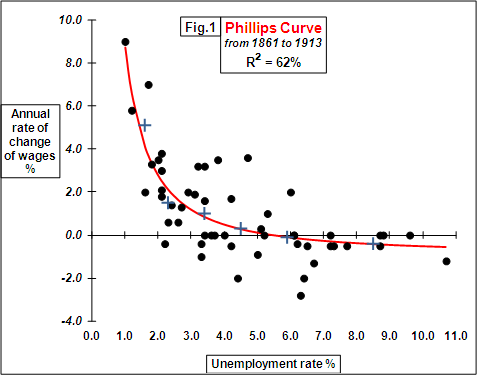 He calculated the average y value for each of those intervals and so derived 6 points (shown as blue crosses above). He then fitted a power curve to these 6 points.

The resulting model was

The flaw with Phillips’ model is that historically, the relationship between unemployment and inflation has not been sufficiently stable to permit exact judgments.

The graph below shows the data of the annual average industrial wage versus the annual Consumer Price index in Ireland from 1996 to 2012. As you can see, the increase in wages has roughly followed the rate of inflation in the recent years of the Irish economy.