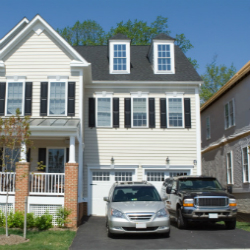 'To every complex problem there is a solution which is simple, neat and wrong' - H. L. Mencken

Driving to work the other day I heard a radio analyst assert that the recent increase in home sales is responsible for the increase in automobile sales (McMansions come with at least two car garages you know!) The short piece didn’t offer much in terms of quantitative information and this made me wonder what data was used to support such a claim.

The analyst could have looked at SEC (Securities and Exchange Commission) filings, the equities and derivatives market, or perhaps research from industry associations such as the National Association of Realtors; the latter would prompt me to consider confirmation bias.

If only considering home sales, Federal Reserve Board economist Andrew Paciorek recently published an engaging paper describing the effects of household formation on housing demand1. Paciorek asserts that in the past 30 years the aging population has moved into smaller homes, which is intuitive from the practicality it offers seniors. Paciorek also postulates that the poor labor market has depressed the headship rate, which is defined as the percent of people who are heads of household via U.S. Census population projections.

According to the S&P/Case Shiller Home Price Index report2, the average U.S. home is now worth approximately 10 percent more than it was a year ago, marking the largest annual improvement since the market turned south in 2006. What of the automobile market though? American popular culture paints home and car ownership as inseparable in the “American Dream”. The most recent J.D. Power report3 projects August sales to increase 12 percent compared to last year, the highest monthly sales volume since 2006.

It would be easy to paint a picture of recovery for these industries based on sales revenues, although there is no indication of a casual relationship between the two. These reports are meant for the average consumer only in a sense to stir up positive sentiment, which in turn spurs more discretionary spending. It is more plausible that these reports are meant for the real stakeholders: shareholders and potential investors. We can surmise that in a world of algorithmic high frequency trading and complex derivatives based on yet other derivatives, that the common equities market does not always correlate to the real-world P&L performance. I recall a former boss’s retort of traditional value investing: 'The market can stay irrational longer than you can stay solvent'.

The graph below is a plot of the aggregate of the five biggest housing market ETFs (exchange-traded funds). (White line: ITB+XHB+REZ+VNQ+IYR) Compared to the aggregate of key automobile makers and a closely tied tire manufacturer (red line: GM+DDAIY+TM+HNDAF+HMC+CTTAY). Automobile ETFs are relatively new with only CARZ and VROM available and do not go back enough for historic plotting purposes. The green line indicates the aggregate of the NASDAQ and S&P 500. The plot is of daily closing prices over 5 years. In light of their specificity, the automobile and housing ETFs do not diverge from the behavior seen in the broad indices.

Comparing indexes of other industries to the broader market offers a similar view by which the equities market does not particularly support a causal relationship between the housing and automobile market (no apparent convergence/divergence or lag indication). Without turning this into an econometrics article, I will argue that lurking variable(s) pulling consumer markets upward is a more plausible explanation.

The vision of a newly well-off homeowner filling his/her garages with new cars is a warm thought for consumers; it offers a degree of optimism bolstered by a scientific-sounding explanation that confirms the latent hopes of not-too-future prosperity. It’s a comforting song that the data doesn’t sing. But, as long as positive voices are favored on the air, and shallow explanations are accepted without question, those with the impetus to ask questions will always have the advantage.