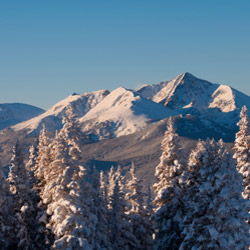 Imagine for a moment that you are an incumbent politician, living in the modern world of austerity. Increasing tax on higher earners is not politically fashionable and taxing ‘hard working families’ as you may refer to them won’t play well. So to make the budget work you have to turn to spending cuts, but there are only so many cuts you can make before they come back to bite your administration.
Traditionally this hypothetical politician still has one refuge, the so called ‘old reliables’. Increasing excise taxes on vices such as alcohol and cigarettes generates a lot of revenue and has the added attraction of appearing prudent and health conscious. This year, the US states of Colorado and Washington (along with Uruguay) added another ‘old reliable’ to the mix when they legalised and began taxing the sale of marijuana.

Those states have begun a groundbreaking experiment that will demonstrate the effects of legalising a long prohibited drug in terms of social and economic impact. It will take time to gauge these effects but one aspect we can look at right now is the initial tax revenue generated. The Department of Revenue for the state of Colorado has released its first breakdown for tax revenue in 2014.

This shows revenue from marijuana sold in January 2014 was $2,927,095 (all taxes). In comparison, in the same period alcohol raked in $3,338,785 and cigarettes $11,913,000. The actual figures generated are even more if you include the 2.9% regular state sales tax applied to all these, but I have omitted this as how much of this is directly from alcohol and tobacco is not broken down perfectly. 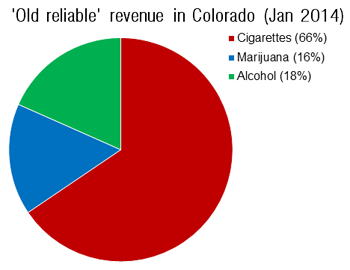 I say this is a conservative estimate as you have to consider that January 2014’s figures represent a black market that is slowly coming out of the shadows. Similar to what was experienced in 1933 when prohibition was repealed, speakeasies took time to turn back into legitimate bars and liquor stores.

Marijuana is not being lightly taxed, part of pro-legalisation campaign’s argument last year was that the revenue raised would go towards a school building programme. There is a state wide 10% marijuana sales tax paid by the consumer (this is on top of the 2.9% regular sales tax and any other local sales taxes). Built in to the retail price will also be a 15% marijuana excise tax that the retailer must pay the state.

The vices in Colorado are still taxed much less than the ‘old reliables’ are in some countries. In the UK for example, more than 77% of the price of a 20 pack of cigarettes is tax. A bottle of wine, similar to the one above, sold in UK would be subject to an eye watering 22% tax. That’s 20% more than the bottle in Colorado (and doesn’t even include the UK sales tax rate of 20%.)

The enactment of the law at the turn of the year was never going legitimise the whole marijuana trade in Colorado. The majority of the legitimate trade has centred on the state’s main city Denver, with that county accounting for more than half of the revenue raised. As time goes by, the new commercial trade will expand outwards from the major metropolis.

Business expansion brings increased revenue, not just from sales and excise taxes but income taxes generated from employment opportunities. You can either look at as new activity or data that is simply now able to be recorded and taxed. Economists will be watching what happens here, and in Uruguay and Washington state, as closely as social scientists will be over the next few months and years.