Did statistical graphics turn a French economist into a star? 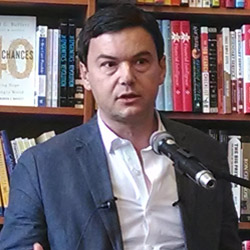 Few idols of the intelligentsia attain broad popularity. But last month Thomas Piketty, an economic scholar from the Paris School of Economics, did just that. In April, when Harvard University Press released the English translation of his 700-page tome on rising wealth in Western culture, Capital in the Twenty-First Century, the book skyrocketed to the top of the best-seller list.


Over 80,000 copies have been sold - a figure that so exceeded the publisher’s expectations that there isn’t a single print copy left. By the time Piketty began his American book tour two weeks ago, the media frenzy had worked itself to such an extreme that the 42 year-old golden boy of economic theory was greeted with something approaching 1964’s Beatlemania (by academic standards, anyway)

Piketty’s Capital has been widely praised by economic pundits. Slate’s Matthew Yglesias considers it a must read. Paul Krugman has said it 'will be the most important economics book of the year - and maybe of the decade.' Such accolades could explain why Piketty has been forgiven for co-opting the title of Karl Marx’s seminal work, but it still leaves the popular success of an academic treatise on income inequality something of a mystery.

Piketty’s copious use of pictures could be one of the secrets behind his success. Capital has 97 statistical charts to help tell the story behind a century’s worth of income data. English and French versions of all the plots are available for download from the author’s website.

{mbox:lightbox/piketty-graph-capital.jpg|width=300|height=196|caption=Click to enlarge Figure 9.8|title=Taken from Thomas Piketty's 'Capital in the Twenty-First Century'}

To give a sample of Piketty’s graphical style, on the right I have shown the most cited chart of Capital: Figure 9.8. The chart depicts a 110-year history of income inequality in two simple lines: one for the United States and one for Europe. The percentage on the y-axis is the percentage of the total national income that is held by the wealthiest 10% of the population.

Although only one slice of the income distribution, it is a useful indicator of the relative imbalance in the wealth of a nation’s populace. The dip and rise we see for both countries makes the central message blindingly clear: after a comparatively equitable period between 1940-1970, income inequity has been consistently rising for the last 40 years, taking the sharpest trajectory upward in the US. The inevitability of inequitable wealth when capitalism goes unchecked is the central thesis of Piketty’s book and the fundamental idea that has got all wonky circles buzzing.

Still, in an age of data visualization, Piketty’s charts leave one wanting more. The simple black and white line graphs with awkwardly placed legends are adequate but unremarkable - so much so in fact that some media outlets have even started touching up the charts like models in Vogue. It is not that I am disappointed that Piketty’s charts are not pretty. We want effectiveness in charts not prettiness. What is a disappointment is that the plots he has used to bolster his data-rich narrative seem passionless.

{mbox:lightbox/playfair-graph.jpg|width=300|height=222|caption=Click to enlarge|title=Exports and imports to and from Denmark and Norway}

You can see this by contrasting the graphical style of Capital with that of William Playfair. More than two centuries ago, Playfair, a Scottish political economist, created the line graph to address some of the very same themes at the center of Piketty’s work - the economic activity of nations and how this activity has developed over time. In his 1786 time series of exports and imports to and from Denmark and Norway (pictured on the right), Playfair uses a number of techniques that help viewers to read the graph.

In addition to a grid of reference lines, Playfair uses well-placed annotation and shading to highlight the change from a period of negative balance (pre 1755) to a period of positive balance (post 1755) for England. This was an author who was passionate about data!

With their impressive effort to establish the World Top Incomes Database, Piketty and his team have begun a narrative about free market systems and their implications for wealth inequality. The world is still waiting for a modern-day Playfair to finish the story.