Are we in a bubble? Lessons in dissecting the stock market 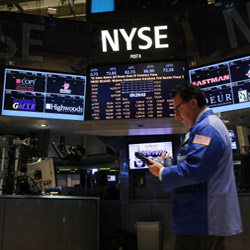 A dangerous misconception is 'this time it’s different'. This is the line that gave Carmen Reinhart and Kenneth Rogoff the title for their book that forensically sifts through various financial booms and crashes that have occurred as far back as the default of Dionysius of Syracuse in Greece, in the Fourth Century BC. Sadly, things are never 'as different' as people perceive and the bubble eventually bursts. Market crashes will always be with us. Why is this true and what can be done about this?

Firstly, such booms and busts appear linked to evolutionarily-stable human preferences for risk, return and over-confidence. Under so-called rational bubble models it seems that many market participants take a 'calculated gamble' balancing the underlying risks against the prospects for future rewards. However, whilst doing so most people are typically over-confident. Further, this process also takes place against a fundamentally uncertain backdrop.

The dual role of new technologies and new inexperienced investors entering the market is key here. During the internet bubble people recognised that the new technologies afforded genuinely profitable opportunities but over-estimated the extent of the potential rewards. Similarly, during the housing bubble, people saw that housing represented a good financial investment in ways previously overlooked.

However, collectively, the market over-exaggerated the scale of the potential gains available. Throughout history, rail-road stocks, telephone companies and trading companies, such as the South Sea Company, have been subject to similar bubbles. More recent examples of this phenomenon include developments in social media exemplified by the recent stock-market floatations of Twitter and King Digital (makers of the popular online game Candy Crush).

Stock market crashes represent significant historical events in their own right. The Wall Street Crash of 1929 heralded the start of the Great Depression. The bursting of the internet stocks bubble in 2000 arguably sowed the seeds for later real-estate and stock-market bubbles which would have altogether more serious consequences for the world economy. The 2008 stock market crash helped trigger a global economic meltdown. These historic challenges remain insoluble and mean that stock markets will continue to fascinate and frustrate future generations.

A fundamental truth is that stock markets are wildly complicated. Further, no one individual or indeed individual subject discipline has all the answers. However, from the hidden effects of high-frequency trading to the increasing inter-connectedness of global markets it seems that in recent years stock markets have become both increasingly volatile and more hazardous to the wider economy as a whole.

Finance is a difficult subject to get right. Loose monetary policy affected the Swedish empire as long ago as the 1660s and may have helped to fuel a succession of recent real-estate and stock market bubbles. Stock markets, in common with the wider financial system, also critically depend on investor confidence rendering both systems inherently unstable; the notes in your purse or wallet only hold their value because of public confidence in the monetary authorities that ultimately stand behind them.

Fundamental uncertainty and speculation will always be part of finance. Despite their high profile neither Twitter nor King Digital are immune from this. Bubbles often occur at a time of economic expansion; typically either at a time of rapid technological development (e.g. internet bubble, railroad stocks) or an influx of new investors (e.g. subprime mortgage bubble). Genuinely profitable opportunities exist but the true extent of the gains available is unknown until this limit is finally reached. As technology continues develop apace, and people try to get rich quick, future stock market bubbles will always be possible.

Stock market crashes clearly have huge significance. Events such as the internet bubble, the crash of 2008 and the Euro zone crisis mean that crashes loom large in the national consciousness. Beyond these recent catastrophes the stock-market floatations of Twitter and King Digital have also hit the headlines. Mathematically, we can show that all these events represent enduring features of financial markets.

Using a mathematical model developed in a paper I wrote in 2012, we can show that the Wall Street Crash of 1929, the 1987 crash, the Nasdaq crash of 2000 and the crash of 2008 are all preceded by speculative bubbles. In contrast, we find no evidence of a bubble in the price of Twitter stocks. In this case prices seem to be mainly subject to highly volatile random fluctuations. On a similar theme we find evidence of an antibubble, or reverse bubble, in the price of King Digital stocks which have fallen dramatically in recent weeks. Both events urge caution and show that in such cases, when it is linked to the development of new technologies, finance will remain intrinsically uncertain. Even high-profile companies cannot avoid this.

Fundamental uncertainties, technological developments, monetary policy challenges and the flawed human beings that make up financial markets all point to the grim inevitability of future stock market bubbles. Some crashes are predictable, others are not. Not all market crashes are preceded by an earlier speculative bubble.

Stock markets are wild and untamable. Global stock markets seem to have become both more volatile and increasingly inter-connected in recent years. There are also significant hidden dangers stemming from the unbridled use of high-frequency trading. It seems that the challenges and dangers posed by global stock markets will only increase over time.

Stock markets yield various interesting mathematical and statistical challenges. It is important to study financial markets, and bubbles and crashes in particular, so that they can be understood as clearly as possible. Perhaps this can lead to greater transparency and market stability. More attention needs to be paid to risk-management. Perhaps future regulations may curb some of the perverse incentive structures and grievous excesses that characterised the 2008 crisis. Only time will tell. However, future stock market bubbles and crashes remain inevitable. Perhaps 'crash-proofing', rather than pretending that future bubbles and crashes can be avoided, represents the best policy for the future.