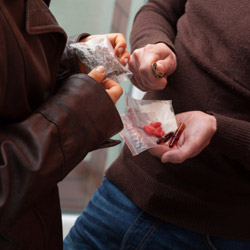 To paraphrase The Wire’s Stringer Bell: 'Product, my dear colleagues. Product'. When the putative 'CEO' of the Barksdale drug gang was referring to 'product', he possibly wasn’t thinking of the 'gross domestic' kind.


Illicit commodities and markets seem far removed from such national performance data, let alone being regarded as beneficial to the nation’s economy. That was until now. The UK government’s apparatchik number crunchers, otherwise know as the Office of National Statistics (ONS), has announced that 'activities such as drugs (sic) dealing and prostitution will henceforward be included within the national accounts'.

Crack dealers and working girls, and their productive outputs, will now form part of the regular data sets used to measure the nation’s economic performance, or GDP.

Cynics may see this as a desperate attempt to give post-crisis, austerity asphyxiated Britain an amphetamine type high of positive data. But there is an historical precedent. In 1987, Italy’s then government decided to include the country’s shadow economy in its official accounts. Overnight, Italy’s economy grew by an incredible 18%, taking it past the UK to become the fourth richest country in the world.

But this is no attempt to give ailing economic data a much-needed happy ending message; the reality is not so fanciful. The inclusion of drug dealing and prostitution – staples of the subterranean economy – in the ONS’s economic calculations is a response to new EU guidelines, standardising the methods used to gauge economic performance across European states.

Of course there are some misgivings about the data. Normally the ONS calculates GDP through a combination of questionnaires sent out to a range of individual business organisations and statistics obtained from government departments. Ordinarily, drug traffickers and prostitutes are not listed in the Thomson’s Directory of local businesses. Hence, the ONS calculates their contribution via model-based estimates using known or existing numbers. In other words, it is pretty much a case of informed guesstimates.

In the case of sex workers, for example, the ONS generalised from a 2004 survey of prostitutes in London. The annex to the ONS’s report acknowledges this to be “a weak assumption” but one it deems necessary as there is no reliable long-term data on prostitution.

The same questions of credibility surround the drugs market: the ONS simply multiplied the estimated number of drug users reported by official surveys with the estimated amount of drugs consumed by addicts. This is likely to underestimate the real size of the drug economy; a normal dilemma when collating criminal statistics. In future months, the ONS is looking to refine its analysis of these clandestine markets.

This official sanctioning of illicit criminal activity is more than a story about recalibrating micro-economic methodologies. The real story behind the ONS story is one about the modern British economy: the co-dependence that now exists between mainstream and illicit markets. According to the ONS’s not entirely scientific calculations, the illicit drugs and sex markets account for 0.7% of UK GDP, effectively adding £9.7 billion to the economy in 2009.

These underground markets are worth more than advertising (0.5% of GDP) and real estate (0.35% of GDP). If anything, like all crime figures, the official numbers are probably a conservative estimate of the true value of drug trafficking and prostitution to the UK economy.

Berkeley social scientist Nils Gilman, an expert on global organised crime, argues that illicit markets provide much needed investment and development funds into struggling local economies – the so-called developmental by-product of what he terms deviant globalisation. It is likely this same process is also occurring domestically – in this case, within the UK.

One aspect of the drug market that supports mainstream businesses is money laundering. Drug retailers have to launder their cash, both as a matter of good financial practice and as a matter of staying out of prison. One of the favoured methods is through gambling, especially on electronic betting terminals, a business worth around £1.4 billion to the gambling industry. Perhaps George Osborne, taking heed of the ONS, should provide tax breaks for money laundering businesses, start-up grants for drug dealers or even set up special massage parlour enterprise zones.

And this leads us to the issue of employment: in a society where the unemployment rate among the economically active stands at around 7%, job creation is crucial. In the case of sex work the ONS, generalising from the 2004 London survey, emerged with a figure of 60,879 prostitutes operating in the UK. This might not be a true scientific measure but it is a reasonable place to start. When you add in the Home Office’s estimate of 30,000 organised criminals, mostly in the drug trade, you have a serious industry.

And then there is the question of income. It is estimated that each prostitute gets through an average of 25 clients in a week at a mean cost of £67.16 per customer. That works out at a monthly wage of around £6700. Of course, the Treasury sees little of this strictly off-the-books income.

However, simple economics will tell you such cash will invariably be recycled back into the economy through personal consumption, which the UK is so dependent upon for growth and stability. It also forms a potentially attractive income stream for those on the medium-to-lower end of the UK labour market; a class that has experienced, historically, a chronic decline in real wages.

Strangely enough this may go some way to answering something of a longstanding economic conundrum: recent economic recessions in the US have, completely contrary to expectation and past research, also seen a marked decline in violent crime and violent robbery. The answer may be that potential criminals have looked to more lucrative, less violent pursuits both within illicit and licit markets.

In the words of Stringer Bell: '…we gonna handle this shit like businessmen. Sell the shit, make the profit, and later for that gangster bullshit'. The Office of National Statistics would certainly agree with Mr Bell.