The rural revolution: how technology has changed farming

The BBC report today that "England could spice up its food production by growing more herbs and spices, says a report looking at the nation's future food security", whilst Chris Rhodes charts agriculture in Britain over the last century in our continuing series of extracts from the upcoming book, Olympic Britain. Olympic Britain shows through statistics the changing face of Britain since the previous London Olympics of 1908 and 1948.

Tractors, combine harvesters and mechanical threshers were all introduced into mainstream agriculture during the 20th century, enabling a smaller workforce to harvest more food from a larger area of land.

Large capacity silos and other storage facilities that maintain constant temperature and humidity have allowed for the safe storage of greater quantities of agricultural produce. The ability to control the pace at which food ripens after it has been harvested means a far greater quantity of food can be gathered in one harvest, without the risk of it spoiling.

Fertilisers have helped to increase crop yields and reduce the time in which crops grow to maturity; while herbicides and pesticides have enabled farmers to better control the spread of disease and limit the damage done by pests.

Spraying machinery allows vast areas of land to be treated in short periods of time by a small workforce. Jobs that would have taken large teams of workers several weeks, like removing weeds from a field, can now be completed in hours by just a handful of people.

Growing more with less. The chart shows the area of land cultivated for staple crops (barley, wheat and oats) and the number of agricultural workers in Great Britain. 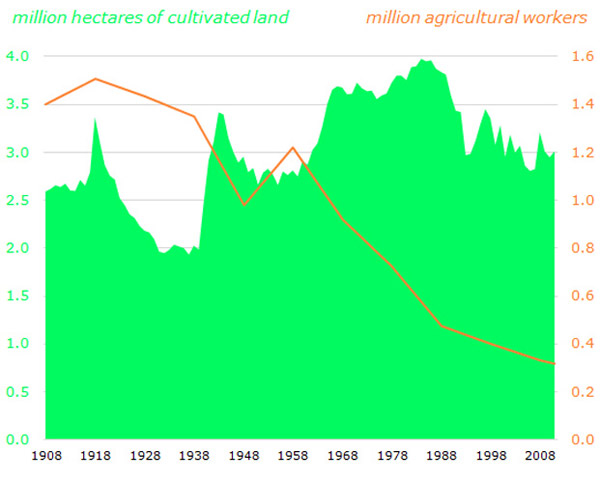 This article is taken from Olympic Britain, a forthcoming book from the House of Commons Library. It tells the story of the profound economic and social change in the UK since the two previous London Olympics, in 1908 and 1948, using statistics and expert analysis. It will be published on 9 July and digital copies will be freely available on the Parliament website.