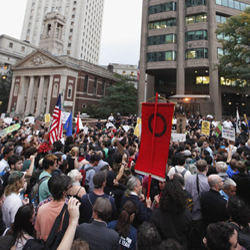 I currently teach at The Silberman School of Social Work at Hunter College located in New York City. Most of the students I teach are working on a masters’ degree and came to social work school to be clinicians. That is, once they graduate, they’d like to work with clients to help them deal with depression, bereavement, stress, and other maladies of living in the modern or, perhaps, post-modern world. I don’t teach the courses that would directly prepare my students for clinical work. Instead, I teach the ones that perhaps many of them went into social work to avoid – public policy and economics.

Now, for some reason, my place of employment tends to attract students who are left of center politically. In fact, in many cases left of center would be putting it quite mildly. As I’ve gone on about supply and demand, efficiency and equity trade-offs, market failures, and other matters that typically come up in an economics course, someone has inevitably chimed in to make the point that all the problems we discuss in class are due to capitalism. This student, and there have been many of them, has continued by saying that in order to truly address such problems we must move beyond capitalism and completely reorganize economic life. During some semesters I’ve heard a variation on this theme.

This variation contends that capitalism breeds a culture of selfish individualism that makes it all but impossible to address the kinds of problems that students in a school of social work as well as many citizens are worried about - poverty, unemployment, poor health, environmental degradation, etc. In fact, some students have put the question bluntly by asking don’t we think that if we weren’t in a capitalist system people would be more collectivist in orientation and, therefore, more inclined to act for the greater good instead of acting mainly out of self interest? I have been struck by this question and, consequently, have given some thought to how one might go about addressing it rigorously.

The first thing to realize is that this question is really one about causality. That is, my students are really asking 'doesn’t capitalism cause those who live within its confines to be more individualistic and selfish than they’d be under a different economic system?' The “gold standard” for answering such questions, thanks to statisticians, is the randomized trial or experiment.

The steps involved in conducting a randomized trial are as follows:

Steps 1 - 6 have resulted in stunning accomplishments in biomedical science. Many people with heart disease, hypertension, diabetes, and other chronic illnesses live a lot longer than they might have over 100 years ago because statisticians working for pharmaceutical companies have applied steps 1 - 6 to help create all kinds of drugs to address the previously listed illnesses and many others. Such drugs are not perfect and can have serious side effects. Also, not everyone has the financial resources that would allow them access to these “wonder drugs.” But I don’t think it can be denied that they have done an enormous amount of good in the world.

So reflecting on the accomplishments of the randomized trial in biomedical science, I’ve been thinking about how it might apply to my students’ question - does capitalism cause more selfish individualism than other types of economic systems (step 1)? Let’s take my students’ contention as our hypothesis (step 2) - the magnitude of selfish individualism will be greater under capitalism than under other economic systems. For step 3 we’d need a set of societies and we’d have to randomly assign some of them to receive the free market capitalist treatment and others to receive other treatments, perhaps feudalism, hunter gatherer, or socialist.

Assuming there is some way to measure the magnitude of selfish individualism in a society, we could get a baseline or pre-treatment measure of such individualism for all the societies participating in the experiment. After obtaining this measure we could subject them to their respective treatments and after a period of time measure their individualism levels again (step 4). Statisticians have provided us with a host of methods, with names such as Analysis of Variance and Multiple Regression Modeling, that would allow us to analyze our data (step 5). And this analysis would allow us to decide if my students’ prediction was supported by the findings of the experiment (step 6).

Now there is just one problem with this randomized trial of free market capitalism - it can’t be done. There isn’t a set of societies out there with a clean slate that we can assign to be capitalist, feudal, socialist, etc. Instead, all the societies we currently know of are already capitalist, socialist, or whatever and they differ in other ways besides economic system. We could measure the magnitudes of selfish individualism in these societies. And we could assess the relationship between economic system and magnitude of selfish individualism, statistically adjusting for some of the other differences in these societies. But the lack of random assignment means that this would be a far cry from a randomized trial and, therefore, any claim of a causal effect of economic system on magnitude of individualism would be more suspect.

But there may be a way out of this dilemma. The theoretical physicist Stephen Hawking has argued that humans should colonize Mars. He, and others who agree with him, seem to be advocating this as a means of facilitating further discoveries in the physical sciences. But the impact of capitalism on individualism is a compelling social scientific question that might be answered by a Mars colony. Imagine we randomly assigned some Earthlings to live a capitalist way of life on Mars while others would be assigned to live non-capitalist ones, after having their baseline levels of individualism measured, of course.

We would need some way of assuring that these Martian societies didn’t interact with each other, to prevent “contamination” of one another’s economic system, just as in a randomized drug trial there is an attempt to assure that study participants are exposed only to the treatments they have been assigned. I don’t know if such a study would make it through my university’s human subjects review board and I don’t know if the National Science Foundation would be interested in funding such a study. But I think it could make a seminal contribution to the social sciences. We could find out something about the relationship between capitalism and individualism, at least the nature of this relationship on Mars. So maybe social scientists should be joining physicists and other physical scientists in the call for colonizing Mars.

With thanks to Samuel Arbesman for his helpful feedback on this article.