Is innovation faltering - or is GDP? 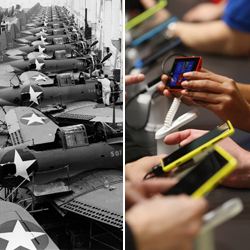 In a recent New York Times column, economist Paul Krugman raises the spectre of a ‘growth slowdown’. ‘A growing number of economists,’ he writes, 'looking at the data on productivity and incomes, are wondering if the technological revolution has been greatly overhyped.'

It’s true that growth pessimism seems to have returned since the 2008 crisis. In 2011 Tyler Cowen declared a 'great stagnation', and in 2012, Robert Gordon argued that we face six ‘headwinds’ to growth. In his column, Krugman quotes Paypal cofounder and investor Peter Thiel, who when complaining about technology said: ‘We wanted flying cars, instead we got 140 characters.’

But are official estimates of productivity and incomes, on which so much of this pessimism relies, the right way to measure the advance of technology?

The origins of national accounting

These narrow economic measures could be misleading. Economic metrics like growth rates and productivity are based on estimates of national income, most commonly GDP - gross domestic product. (And formerly by GNP - gross national product. This difference is not important here, but for this and other technical issues I thoroughly recommend Diane Coyle’s highly readable history.)

GNP/GDP, and the entire modern system of national accounting, is relatively new. It was born in the depths of the Great Depression and formalised as war loomed, by Simon Kuznets and Colin Clark - among many others. So why then and not earlier? Crisis, the needs of war planning, and as the late economic historian Angus Maddison wrote, 'economic growth was much slower before the 19th century and therefore seemed irrelevant or uninteresting'.

Although Kuznets originally wanted a measure of welfare, GDP never was that, nor was it intended to be. This attracted criticism from the earliest days. Coyle quotes Moses Abramovic, in 1959, warning that '[w]e must be highly skeptical of the view that long-term changes in the rate of growth of welfare can be gauged even roughly from changes in the rate of growth of output.'

In the post-war years, criticism of national income reflected the social upheavals of the time. As Bobby Kennedy famously put it in 1968:

'It counts the destruction of the redwood and the loss of our natural wonder in chaotic sprawl. It counts napalm and counts nuclear warheads and armored cars for the police to fight the riots in our cities... Yet the gross national product does not allow for the health of our children, the quality of their education or the joy of their play. It does not include the beauty of our poetry or the strength of our marriages, the intelligence of our public debate or the integrity of our public officials ...it measures everything in short, except that which makes life worthwhile.'

Despite these criticisms, and the valiant attempts of some economists to modify GDP to account for them, it has largely resisted change. Its defenders could argue that it served its core purpose: measuring output, the ups and downs of economic activity, and the changes in our material wellbeing.

But increasingly, GDP may not even be doing that - especially over long timescales.

The technological challenge to GDP

GDP has never been a good tool of comparison over the very long run. According to Maddison’s heroic long run estimates, Haiti in 2008 had the same real GDP per capita as Germany in 1500 (around $690 in 1990 prices). Yet in Haiti, life expectancy at birth is 63, far higher than the 40 years a newborn would expect to live in 16th century Europe. Also, in modern Haiti, the literacy rate is three to four times that of medieval Europe. Around two-thirds of Haiti’s people have cellphones, literally inconceivable before the 20th century. So what does GDP tell us? In what meaningful sense is Germany in 1500 anything like Haiti in 2008?

Certainly, most economists would take reconstructed historical estimates with a grain of salt. It’s true that modern estimates are far more reliable: through the 20th century, national income statisticians have worked very hard to account for changes in technology, in tastes, in prices and in qualities. But still their efforts may have been insufficient. In a well-known paper, William Nordhaus argued that conventional adjustments had underestimated efficiency gains in lighting a thousand-fold since the 19th century. '[I]s it possible,' he asked, 'that by the very nature of their construction, price indexes miss the most important technological revolutions in history?'

As we travel further in any direction from its birth the 1940s, it becomes ever more difficult to build a coherent story around GDP, and GDP seems to become an increasingly poor measure of output itself.

For example, in the 20th century, Encyclopaedia Britannica was sold door-to-door, peaking at half a billion dollars in revenue in 1990 and some portion of this fed into GDP estimates of publishing. Today, Wikipedia has entirely displaced the traditional encyclopaedia. The encyclopaedia-publishing sector has (presumably) vanished from the national accounts, and yet we have better encyclopedias than ever before. The same problem applies to many digitised products: software, music, video. As products become cheaper, and even free, the divergence between the market price (as recorded in GDP) and what economists call the ‘consumer surplus’ (which affects welfare) is growing wider.

Of course this problem is not new. The benefits of vaccination were surely understated by the market value of doses sold. But whereas once this was a niche concern, today’s economic weight, in employment and consumption, is shifting to just those sectors - education, healthcare, entertainment, information - where this problem may be greatest. As a commission of economic worthies put it in 2009, GDP is increasingly ‘mismeasuring our lives’.

A question for philosophers, not economists

The true measure of civilisation is not, and never was, an economic question. But I would argue the economics is not even the final measure of the ‘technological revolution’, that so concerns Krugman. At some point we need to step back and reflect on the real changes in our lives.

Gordon correctly points out that in some dimensions, technology today is unimpressive compared with the last century’s gains – and the expectations they created. Maximum commercial travel speeds have stagnated or even gone backwards (but then more people fly than ever before). Increases in life expectancy are coming more slowly, as more of us live long enough to succumb to more challenging diseases. No human has ever been further from Earth than the crew of Apollo 13, in 1970. We don’t have Thiel’s flying cars (although self-driving cars seem inevitable).

But what's so special about flying cars? In 1940, to contact my family in Australia I could send a letter (taking weeks) or a telegram (taking perhaps hours, in practice, but with very limited capacity). Even by the 1990s international calls were expensive and necessarily short.

Today I can use Skype or FaceTime to call my family in real time, with video, while I’m on the move. Questions which were virtually unanswerable in 1940 can be answered in seconds by Google. A student in a slum in Mumbai has access to the same knowledge as an undergraduate at Harvard. Perhaps I can’t fly to Venice any quicker, but I can look at any street or canal through the wonder of Google street view. It hasn’t worked out quite like The Jetsons or even Back to the Future Part II, but early 21st century technology is miraculous nonetheless.

We need to refocus on exactly what progress and development mean, instead of blindly relying on a 1940s model of the world to guide us. When considering the poorest countries, this is not a heterodox idea: measures of 'multidimensional poverty', such as the Human Development Index (HDI) have become popular precisely because they combine a few, relatively noncontroversial, real and concrete human capacities.

The time has come for a measure of 'multidimensional prosperity'. If literacy is a worthy goal in itself, as the HDI suggests, then how can we keep using a measure that fails to reflect the millionfold-plus increase in access to written material that has accompanied the rise of the internet? Surely life expectancy is only as valuable as the options open to us for enjoying it?

What would this measure look like? Self-reported ‘happiness' has supporters, but seems unappealing, being bounded above and possibly subject to a hedonic treadmill effect. Perhaps, following the Russian astronomer Kardashev, we should measure our ability to harness energy - which is, after all, the stuff of life: around 18 terawatts globally, up from 10 terawatts in the 1970s. Stepping away from technological progress, perhaps like the OECD, we should factor in civic engagement or work-life balance.

GDP’s strongest virtues are that it is relatively well standardised, and broadly accepted. In truth, it’s hard to see how any other measure could displace it, be it an index with arbitrary weights, or a disaggregated ‘dashboard’ of such measures. On the other hand, GDP has been around for 80 years, and is starting to show its age. It fails to reflect some of the biggest recent changes in our lives, and this problem will only become more serious. It deserves a well-earned retirement.

This is an edited version of a three part post Andrew published on his personal blog.