Too many flats, not enough houses? The geography of London’s new housing 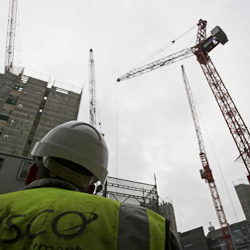 The UK is currently experiencing climbing property prices and a growing housing demand coupled with a shortage of new supply. A microcosm of these problems can be found in London, which shows the strain being placed on the make-up of the city’s housing market.

In my work in the field of urban studies, I spend a lot of time looking at data on mortgage lending, housing market patterns and the location of new housing. Recently, I’ve been looking at the location of new housing in London, to try and get a sense of whether the capital is providing enough new housing, of the right type, at a time of intense market pressure. But the results suggest that London’s property market is causing a significant imbalance between the supply of new flats, and the provision of other types of housing.

In 2014, the mayor of London published the city’s most recent 'Strategic Housing Market Assessment'. This document sets out London’s future housing needs and helps inform the city’s overall housing strategy. In short, it predicts further population growth in London of around 100,000 per year and, as one might expect, it cites affordability as a perennial problem, with average property prices now in excess of £500,000.

Later in 2014, the mayor’s office published 'Housing in London 2014', the evidence base for London’s housing strategy. This report notes that flats comprise just over half of London’s accommodation, compared to less than 20% in the rest of the country. A substantial proportion of this has come from the sub-division of larger houses, in addition to the rise in new apartment developments in central London.

The well-publicised demand for London housing is now a global phenomenon, and in the two years up to June 2013, non-UK residents bought between 10% and 15% of new build homes in the capital – and 49% of buyers in ‘prime’ central London areas – according to estimates by Knight Frank. Therefore, it’s hardly surprising that 'Housing in London 2014' reported that the affordability of owner occupation is ‘at its worst ever’.

Given this complex and pressurised market, along with supply not keeping up with demand, I sought to establish the type and location of new housing in London since 2010, using HM Land Registry sales data1. This data provides an interesting insight into the London housing market as it struggles to keep pace with increasing demand from local and international buyers.

The patterns in the data from the last five years show a striking disparity in the distribution of property types. The starkest figure is the 88.8% of transactions that were for flats. This concentration of flats means that terraced houses only made up 7.1% of new builds, semi-detached properties made up 2.4% and detached houses comprised 1.7%.

The map above gives a general impression of the concentration of new development in central London, whereas the data below provide a more detailed overview of the nature of the development by area. The first table provides data on the top five London boroughs in terms of total sales, with a raw average price.

The second table below shows the top five boroughs by average sold price for new properties. Tower Hamlets is by far the highest borough for volume of new builds and, unsurprisingly, new build sold prices are at their highest in Westminster, Kensington and Chelsea.

Breaking these figures down by property type reveals how house building in London has responded to the intense demand of the past five years. The vast majority of new properties sold were flats, but this varied significantly by borough. According to the data, all 341 new properties sold in the City of London during this time were flats, in addition to 977 out of 981 (99.6%) in Westminster, in contrast to 662 of 1184 (55.9%) in Havering, the borough with the lowest percentage of new build flats.

The geography of new terraced housing in London follows a more suburban pattern, with over a quarter (26.4%) of new build sold properties in Bromley being terraces and 25.6% in Barking and Dagenham. The boroughs delivering the most new terraced housing by volume were Hillingdon (401), Bromley (360) and Havering (238).

These results may not be surprising for anyone who has seen the large number of construction sites in the city. But in the context of an extremely pressurised housing market, where the local demand for housing is competing with a global demand for investment opportunities, it would appear that market demand is resulting in the balance of new supply being far too skewed towards flats.

Critics have been keen to comment on the extent to which this situation reflects the view of housing as an investment opportunity rather than housing as a home. The balance of property types needs to be carefully considered if London is to meets its future housing needs in a sustainable way. Even taking account of the gaps in the data, it seems clear that those wishing to buy a new property that isn’t a flat will struggle to do so. This evidence represents an attempt to start a conversation about this critically important issue. The question of what should be done about this is of course something that requires careful thought and decisive action.

This article is an expanded version of a post Alasdair posted on his Under The Raedar blog.

1.       This data covers market housing only, and excludes a number of transaction types (e.g. sales below the full market value). The maps are based on all new build homes sold in London from 1 June 2010 to the end of April 2015 (the most recent data). During this time, according to HM Land Registry, there were 42,938 transactions on 42,813 properties. This indicates that quite a few properties are not being picked up in this dataset - e.g. compare it to the completions data from the London Datastore.