Are we accepting austerity? 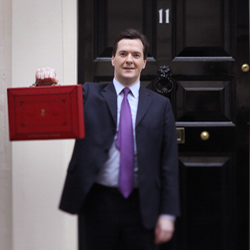 When the government says times are tough and cuts have to be made, we expect public opinion to swing in favour of higher taxes to prop up public spending on essentials like healthcare and welfare. In the last major recession in the early 1990s, the British Social Attitudes survey (BSA) tracked some fairly dramatic shifts in public opinion - concern for the unemployed shot up, as did support for ‘tax and spend’.

But here we are, emerging from the most severe and long-lasting recession in living memory, and there’s barely any movement in public attitudes. We thought views might shift as Britain entered recession, but they didn’t. We thought opinion might change as spending and benefit cuts took hold, but we’ve seen nothing more than a slight wriggle - certainly far less than we would have expected based on patterns over the last 30 years.

In the latest BSA survey we found that only 37% want higher taxes to pay for increased spending on health, education and social benefits - a rise of only five points since 2010 and a considerably smaller figure than the 65% we saw in 1991. In spite of widely publicised cuts to benefits, like the benefit cap and the end of the ‘spare room subsidy’, only 30% want to see more government spending on welfare benefits compared with 61% in 1989, and support for increased spending on welfare has actually gone down in the last year. The public is relatively unsympathetic to spending on working age benefits and austerity hasn’t changed that. 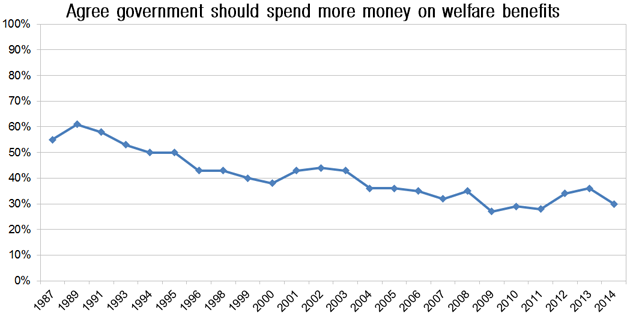 It could be argued that the public at large isn’t aware of the UK’s current levels of poverty, but our data doesn’t bear this out. Around two thirds of people believe that poverty has increased in the last 10 years. A significant majority are also concerned about economic inequality – 60% of people feel that ordinary people do not get their fair share of the nation’s wealth.

So what’s different this time around? And how do we reconcile this apparent dichotomy: that the public are aware of rising poverty, but not prepared to pay more to support the poor through the benefits system or through extra spending on public services?

The answer may partly be found in attitudes to the benefits system. A majority of people in Britain believe that most unemployed people in their area could find a job if they really wanted one. And cuts in welfare spending have not stopped the public from believing that benefits actually deter people from finding work. More than half (52%) think that benefits for the unemployed are too high and discourage work.

While 56% think the current benefits system supports people on low pay, only 18% of people believe that the benefits system effectively encourages people to move off benefits. The government has made a big play of how its programme of welfare reform will end the ‘culture of welfare dependency’ and get people into work. But it seems the public is yet to be convinced and this may account for some of the reluctance to see more money pumped into benefits, even though poverty is on the rise.

This division might also be explained by a broader public acceptance of austerity. The belt-tightening rhetoric from all three of the main political parties has been consistent, with their disagreements more around the degree of cuts rather than the need to make them. Perhaps the message is united enough to have penetrated the public psyche. And it could be argued that we’re not really experiencing austerity – after all the amount of spending as a proportion of GDP is still higher than it was during the 1990s. There are those who suggest that the real impact of benefits cuts are yet to be felt.

So with a new round of cuts confirmed in the latest budget should we expect a much bigger reaction against austerity in the years to come? Predictions of public attitudes are always tricky but we think it’s unlikely, at least in the short term. If a period of controversial and high profile cuts to spending, a rise in food banks, and an increase in poverty haven’t engendered a notable increase in support for public spending then we can assume, at least for now, that the public view is settled.