House prices: regional variations and the impact of Help-to-Buy 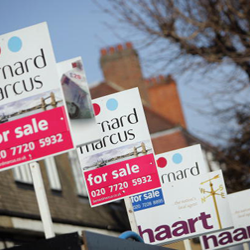 'House prices in England and Wales hit record high’ ran a headline from last month as the housing market overtook its pre-financial crisis peak. But beneath the surface of this news lies vast variation in the growth of property prices across the different regions of Britain.

Of those who have owned property since the mid-90s or earlier, some have seen modest gains, while others have struck it lucky with unexpected supercharged growth. It’s impossible to say for sure where these trends are headed in the years ahead. But journalists reporting on the record prices were able to find some ‘experts’ who caution that ‘boom and bust’ is still a worry, while some believe the housing market is ‘robust’.

The outcome of either event depends on whether we are in a property bubble. However, a more interesting question is whether there are regional bubbles in different parts of the country.

The Land Registry has a data series on median house prices in England and Wales going back to 1995. Between 1995 and 2014 house prices have seen a median increase of 250% across the country. So wherever you live, if you purchased a property in the mid-90s, the market has been kind to you. But some have hit the jackpot more than others. Knowsley on Merseyside only saw a modest increase of 146%, while the City of London saw a whopping 576% increase over the same nineteen year period.

As you can see in the map below1, the areas to do better than the median (250%) mostly lie south a line stretching from The Wash to the Severn Estuary.

In fact, of the top 20 areas for price increases, 18 are in London. The other two are the capital’s upmarket commuter towns of Brighton and Cambridge.

Let’s assume that the lottery of access to the Bank of Mum & Dad only helps to raise a deposit. At some point a buyer would like to pay off their mortgage, so the ratio of house price to salary is the key to defining how long this will take. Across England and Wales, the average house price is nine times the average salary.

So with that in mind, the map below shows large parts of the country are at the average or below (cream to orange). However, anyone on an average salary south of Cambridge is going to paying off their mortgage for longer.

What effect did Help-to-Buy have?

George Osborne’s big idea to give those wishing to own property a leg up was to support their mortgage application to the bank. Basically, as long as you can raise a deposit of 5% of the house price, the government would help you out with the shortfall required to get a mortgage.

Supporters lauded it as the Treasury lending a helping hand to those wishing to become a home owning 'striver'. Critics said that it would only make a bad situation worse by pushing a surging market ever higher.

The uptake of Help-to-Buy has varied widely across the country, with some areas seeing single digit loans issued, while others saw triple figures.

But if we compare this with the increase in house prices from 2013 to 2014, they don’t seem to follow the a similar geographical pattern. 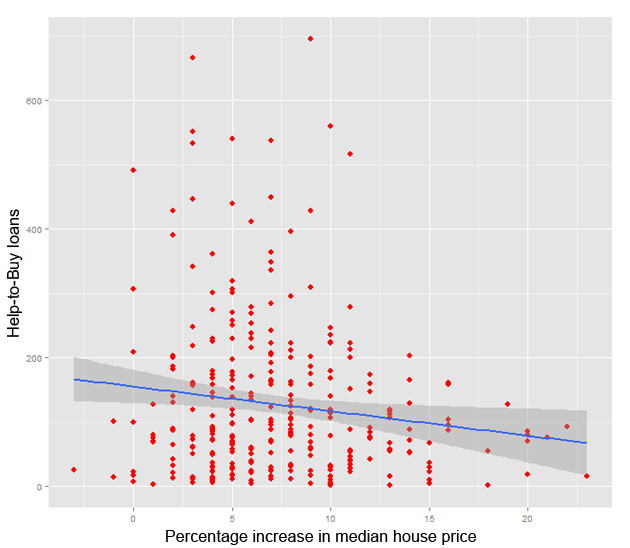 Each red dot is a local authority area. The blue line shows a strong negative correlation (-0.13) between the two sets of data.

There could be a lag on the effect of Help-to-Buy on the wider market that has not shown up in the data yet - time will tell. But based on what we know, the lack of a correlation here means the causation behind these price increases are down to the many other confounding factors involved.

The reasons behind the ‘robust’ property market, particularly in the South East, are probably more down to a sluggish new housing supply, rising demand and historically low interest rates. The Bank of England's governor, Mark Carney, keeps hinting that interest rates will soon rise. But until they do, the housing market looks like it will continue to climb.

1. Unfortunately, Scotland does not have a similar dataset to match the one from England and Wales. Annoyingly, the Scottish statistics on median house prices do not stretch back as far as 1995 and are also produced by financial year too.

2. The Help-to-Buy dataset is also produced by financial year, so exact time period comparison with the median house prices is not possible with the current data available.

3. Any areas in the maps missing colour, means data from that area was missing in the original datasets.