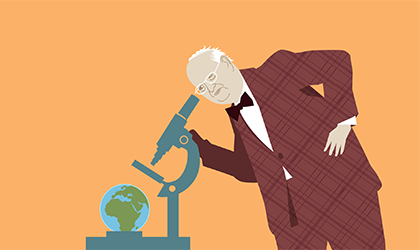 A few years ago, former World Bank president Robert Zoellick pointed out that: "In physics, Nobel prizes are awarded for being correct while in economics they are often awarded for being brilliant." Economist Angus Deaton noted that contrast and pondered how interesting it might be to classify economics laureates into Zoellick’s two boxes. Yesterday Deaton himself won the Nobel prize for economic sciences. He clearly belongs in both boxes.

Deaton was cited for his "three to four decades" of work on consumption. No-one can work in this field without being deeply influenced by what he has done. Wherever one turns in the analysis of consumption, Deaton has been there, has seen deeply into the issue and has shaped the questions being asked. To me, his work is a model of what applied economics ought to be. No award the Nobel committee has made has pleased me as much, for the recognition it gives both him and the type of work he does.

But statisticians can also rejoice in this award, for Deaton is the type of economist who is thoroughly responsive to data.

Welfare and consumer demand
His subject matter, at its broadest, is the welfare of households. Understanding how to measure living standards is the foundation of accurately assessing policy outcomes such as poverty and inequality, and understanding how living standards are determined by economic circumstances is the foundation of designing policies to address those social problems. From an economic perspective, living standards are determined by what households consume. Deaton made his name by looking both at how budgets are spent within periods and how spending is spread over periods in a lifetime by borrowing and saving.

Designing policy to promote welfare requires an understanding of how the goods that people consume depend upon their incomes and the prices they face. The best model we have for that starts with the assumption that households make choices to best satisfy their preferences given what they can afford. Such a model not only structures interpretation of behaviour but also allows us to infer things about how prices and incomes affect welfare. Design of taxes on goods, say, can thus be made to best serve households’ interests – a topic of early interest in Deaton's career.

But a specification that is too simple may neither fit the data nor leave scope for evidence to decide the policy questions we are interested in. Too complex a specification and we are left with an uninterpretable mess. Deaton, with colleague John Muellbauer, crafted a model – the Almost Ideal Demand System – which strikes a near-ideal balance between these considerations. It has become the mainstay of applied work. Easily estimated, delivering straightforward tests of the underlying theory, but flexible enough to describe data well, the Almost Ideal model is an exemplary marriage of applied work and economic theory.

Beyond this, Deaton’s contributions to demand analysis are legion, always aimed at a sophisticated bridging of the gap between the necessary simplifications of theory and the nuances of applied work. He has helped us understand, for example, how to compare economic wellbeing between households of different demographic types in a way that is consistent with demand behaviour; or how to incorporate a recognition of how the prices consumers pay for goods may reflect decisions on quality choice.

Consumption and saving
The second strand to Deaton’s work mentioned in the Nobel citation covers allocation of spending over time. Once, this was a concern more of macroeconomics than microeconomics but Deaton, with his co-authors, has been a pioneer in treating consumption and savings behaviour empirically at the household level. This focus on the household is central to his work – Deaton has said in the past that assuming lessons about individuals can be learnt from aggregates is typically "as dangerous and misleading" as it is "unrealistic".

Empirical work in household consumption and savings is problematic because households’ lives are longer than the periods over which they are observed in surveys. Deaton's work develops techniques to overcome this by combining data sources, grouping households by dates of birth and following generations across surveys so that the right questions can be addressed. From that work emerges an understanding of how households learn and adapt to the arrival of information about lifetime incomes by changing their consumption plans as they age. Different sorts of shocks – sometimes temporary, sometimes permanent – can be accommodated differently and they feed through differently into spending as, within each generation, cumulation of shocks drives inequality in consumption and income.

Finally, the application of Deaton’s work to the understanding of poverty in developing countries – especially through the use of household survey data – is credited with “immense practical significance”.

The importance of measurement
Many different themes run through Deaton’s work – one of which is an emphasis on the importance of measurement. In his view, data collection and economic theory have become too separated, to the advantage of neither the data collector nor the economic theorist. Collectors need the guidance of theory and analysts need to understand the data they work with. Too often, Deaton says, “what we think we know about the world is dependent on data that may not mean what we think they mean”.

There is always stress on the integration of measurement and theory, but the sort of theorising that Deaton is a master of is not idle abstraction but woven into applied analysis. In this he aligns himself with the views of the Irish economist Terence Gorman “who saw the task of theory as providing models and methods that made life easier for applied analysis”.

Deaton regrets the possibility that “the mould for that kind of theorist has been lost”. However, through his own work, he shows us that such integration is still possible.