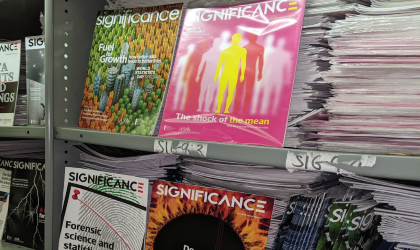 Significance bills itself as “a magazine about statistics and data science, written by experts for everyone”. But too few of its featured experts are women, as an analysis by Karen Lamb, Jessica Kasza, Sophie Calabretto, Rushani Wijesuriya and Linda McIver shows.

Why are women underrepresented in science, technology, engineering, and maths (STEM)? The common mantra “you can’t be what you can’t see” holds a lot of weight. Visible role models from diverse groups are critical to inspire those from similar groups to consider jobs in STEM. Unfortunately, women are underrepresented in both science awards and as scientific experts in the media.

The Royal Statistical Society (RSS), Statistical Society of Australia (SSA) and American Statistical Association (ASA) have all highlighted the importance of gender equality within their communities in recent years. This is often as part of a push for greater diversity more broadly. Under President Deborah Ashby’s leadership, the RSS outlined a plan to promote equality, diversity and inclusion at its 2020 conference (bit.ly/36vQzVj). The SSA established a committee focused on equity, diversity and inclusivity in 2021, and has made a call for more diversity at the top (bit.ly/3OpCERS). Focused specifically on gender, the ASA has a Committee on Women in Statistics that has actively reviewed gender balance in its activities (bit.ly/3OqdJgR).

Significance is a key outlet for statisticians within, and outside of, these societies, providing a venue for them to share their stories in an accessible way to a broad audience. However, if diverse contributors are not represented in the authorship of Significance articles, Significance has the potential to alienate key groups of their target audience and their target authorship. As women in STEM, we wanted to know exactly how well we were represented within the pages of Significance. We examined the representation of women in Significancearticles since its inception in 2004 to assess the gender balance of contributors to the magazine over time.