A World War II investigation, updated for the modern era

Written by Brian Tarran on 09 October 2019. Posted in News 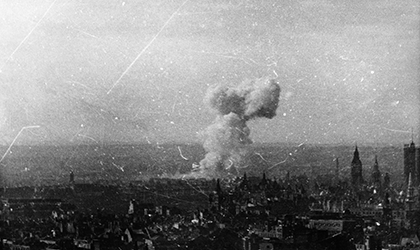 "In the early morning of 13 June 1944, one week after the D‐Day landings, the Nazi regime launched a new weapon at London. The first Vergeltungswaffe 1 (Vengeance Weapon 1, or V‐1) hit a railway bridge in Mile End, killing six people and leaving 200 homeless. Over the following nine months, more than 2,300 'flying bombs' fell on London, killing an estimated 5,500 people."

So begins the story of "The flying bomb and the actuary", winner of our 2019 early-career writing competition. Authors Liam P. Shaw and Luke F. Shaw follow in the footsteps of R. D. Clarke, a British actuary who sought to determine whether the apparent clustering of V‐1 strikes on London during the Second World War was the result of targeting or random chance.

The article is published in full in our October 2019 magazine, and is now free to read online. Liam and Luke have also followed-up their award-winning article with a blog post that goes into more detail about the process of data import, cleaning and analysis.

Congratulations to Liam and Luke, once again, for winning the 2019 Statistical Excellence Award for Early-Career Writing, and congratulations also to our runners‐up: Marco Antonio Andrade Barrera of the National Autonomous University of Mexico, for his article, “A story about a tiny bot”, and Maximilian Aigner of the University of Lausanne for “Trouble in paradise: polarisation and the popular vote in Switzerland”. These articles will be published in the coming weeks on this website.

Details of our 2020 writing competition and award will be announced in February 2020.