Evidence of uncertainty: An introduction to our April 2019 special issue 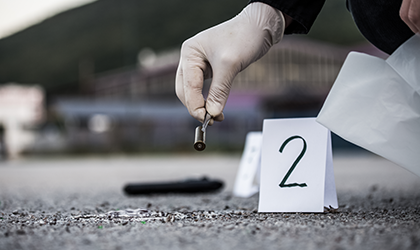 In the heyday of television shows like CSI: Crime Scene Investigation, forensic science seemed not only high-tech and glamorous, but also simple and straightforward. Viewers would watch as the fictional scientists of CSI matched evidence to suspects and suspects to crimes with nary a hint of doubt or uncertainty. However, out in the real world, evidence and conclusions are never so clear cut.

In the textbook, Interpreting Evidence, Robertson et al. explain that, “evidence should not be expected to give certainty” and “a scientific witness will not, in principle, be able to say that two samples came from the same person”. And yet, in actual court cases in the United States, innocent people have been convicted, in part, on the basis of testimony by experts that went far beyond what science would permit them to say.

A decade ago, in response to cases of this sort, the US National Academy of Sciences (NAS) published a report which concluded that many types of forensic scientific evidence lacked adequate scientific validation. The report built on years of prior criticisms by statisticians and others.

On the tenth anniversary of the NAS report, we dedicate our April 2019 print magazine to forensic science and statistics. Over 28 pages, our contributors take stock and reflect on the report’s impact and recommendations, the research and other developments that have taken place in the intervening years, and the challenges that remain to be addressed.

We are grateful to all our contributors, but special mention must go to Alicia Carriquiry, Stacy Renfro, and Sarah Carraher of the Center for Statistics and Applications in Forensic Evidence, and Glinda Cooper of the Innocence Project, who first approached us with the idea for this special issue. Our thanks also to the Royal Statistical Society’s Statistics and Law Section, whose members and associates helped with the development of several of the articles you are about to read.

Forensic science is a large and diverse field and we cannot hope to have covered its entire breadth and depth in a limited number of pages. Nor could we address the differences between the legal systems of each country. (The articles focus predominantly on the USA as that is where most of this issue’s contributors are based.) All of which is to say: there is much more to write on this topic and we hope this special issue inspires further contributions in the months and years to come.